You are here: Home / Farm / Are Bantam Chickens Right for Your Flock? 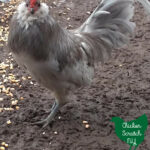 If you’re on the lookout for a few small birds with big personalities bantam chickens might be just the thing you’re looking for.

What are Bantam Chickens?

Bantam isn’t a specific breed of chicken, it’s a weight class. Just like in MMA and boxing it’s used to describe the little guys.

It varies with the breed but a bantam is generally 1/4 to 1/5 the size of the standard sized birds. The breed standards are the same for the standard and bantam sizes.

There are a few kinds of ‘true bantams’ including the Belgian d’Uccle, the Seabright, the Rosecomb and the Nankin. Those breeds only exist in bite-sized form.

The rest of the bantam breeds of chicken, like bantam Brahmas and bantam Easter Eggers, have a full sized counterpart.

Silkies are somewhere in the middle. They’re a small bird overall and in the United States you’ll have a hard time finding any silkies that aren’t bantam sized. Silkie roosters in the US are around 2.25 pounds and hens are about 2 pounds.

In Europe there are two distinct sizes with the bantams being tiny at 22 oz for rooster and only 18 oz (just over a pound) for hens. The European standard size silkies are a little bigger weighing in around 4 pounds for roosters and 3 pounds for hens.

The Benefits of Bantams

Firs things first, I’m writing this from the perspective of a crazy chicken lady living the north east (aka frozen hellscape) with a large, mixed species free ranging flock.

I’m really bad at giving concise or definite answers to questions about chickens because so much is situational. Something I consider a pro might be con for you and visa versa. That’s why I try to explain my reasoning.

On to the benefits:

It’s a universal truth from hamsters to kumquats that tiny things are just cuter. I don’t care how bitter and jaded you are, bantam chickens are cute as hell.

Even when they’ve reached their full size they maintain that baby-cute quality that makes them irresistible. My ex-husband called my original bantam Easter eggers my ‘fake chickens’ but even he admitted their uselessness was overshadowed by their adorable appearance.

Bantams are popular for kids, their smaller size makes them easier for a kid to handle and generally less intimidating. My old Brahma rooster was a gentle giant that could look eye to eye with my 3 year old, even though he was sweet as pie it’s a bit scary.

If you’re dipping your toe in the chicken pond they aren’t a bad way to start but you should still pay close attention to the breed. Silkies, Cochins and Brahmas are popular bantam varieties with calmer personalities.

Rosecombs, Sebrights and Old English Game bantams are more active and less likely to enjoy a cuddle. Not that I’m a big chicken cuddler, I prefer to treat my chickens like livestock.

I have noticed that my calmer and more docile birds tend to stay closer to home and out of trouble. My barn/coop is set back from the road and it’s pretty rare to even see the silkies in front of the house, never mind in the road.

If you only have a small yard or pen bantams are your best choice. Chickens are flock animals and 3 is the absolute minimum I would be comfortable keeping.

I have a large coop inside my barn, an attached run (that currently doesn’t have a door) and then acreage for my flock. Space isn’t really a concern for me when I’m selecting birds but it might be for you.

Standard sided chickens need about 4 square feet of space per bird in the coop, bantams only need 2. That’s a pretty big difference.

You will need more space if you are keeping your birds contained, each full-sized bird will need an additional 10 square feet in a run while a bantam would be content with an extra 5 square feet.

I’d never recommend you start out with one of those pre-built chicken coops from Tractor supply or Amazon just because they’re so small but if all you want is a handful of bantams you’ll be ok.

If you go the pre-made route keep in mind the coop space, if you’re in a place with crappy weather, rain or snow, your birds will be spending a lot of time inside.

Bored & cramped chickens will do terrible things to each other, try to keep them entertained in the coop and make sure they have adequate roosts and nest boxes.

Some people even keep chickens as house pets. The Serama is a very tiny breed of bantam chicken popular as a house pet.

Personally, as much as I love my flock I think they belong in the barn. Flamingo lived on my porch for a month after getting hit by a car and that was more than enough.

Even though bantams are much smaller, they aren’t that much quieter or neater than full sized chickens!

The Downside to Bantam Chickens

Over the years I’ve had a handful of bantam chickens in my flock and I think they’re a great addition to a mixed flock. But I personally wouldn’t want to only have bantams.

The main reason I keep chickens is for fresh eggs. Bantam hens do lay eggs, and some of them are prolific layers. But the eggs are small.

My kids go nuts over tiny eggs, I’ve yet to find a kid that doesn’t. Honestly I still get a kick out of them. But if you’re selling eggs your customers are going to be, at best, disappointed with a dozen miniature eggs.

Even for home use it can be annoying to bake a cake when all you have left is a pile of baby eggs. You can eyeball it and cross your fingers or break out the scale but either option is more of a pain than it needs to be.

I have been meaning to play around with them in cocktails but last summer I started getting violently ill after eating eggs so it’s been on the back burner for a while. By the way, being a chicken blogger with 60+ birds and an egg intolerance is super fun.

Bantam chicks are stupidly small. I had to delay shipping on my last hatchery order because I’d ordered bantams and they were afraid the chicks wouldn’t survive the cold.

I wouldn’t say bantams are a lot harder to raise as chicks but they have a few issues you should be aware of.

They a less forgiving with heat. They don’t have a lot of body mass and they will get chilled much easier than larger chicks. If you’re seeing a lot of hudding or getting pasty butt double check your temps.

Bantam chicks are also more likely to get soaked in the waterers. You can keep prevent the water problems by adding glass marbles to the waterer, they can still drink but they won’t be able to walk in the water and get wet.

You also need to be careful brooding full sized chicks and bantams together. Make sure they have lots of space and no corners to prevent trampling.

These chicks are the same exact age, the black one is a silkie and the yellow is a Brahma.

Once you get them out of the brooders in into the barn yard they aren’t safe. There’s a sweet spot in bird size where the hawks go bananas on my birds.

It usually hits around 2-4 months where they’re the perfect size to get picked off by visiting Red Tail hawks. The problem with bantams is they never outgrow that size.

Roosters are Tiny but still Assholes

I’m not anti-rooster by any means but they are one of the less enjoyable parts of chicken keeping. Bantams are not exception, don’t think that just because they look like toys they’ll be peaceful.

This little guy is a full grown Easter egger rooster. He’s pretty friendly, which is why he’s still hanging around. It’s also hilarious to watch him ride the big hens like a tiny jockey.

One of the most aggressive roosters I’ve ever seen was a tiny bantam Cochin my former mother-in-law had. I was over at her house and I kept feeling a gentle pat on the back of my leg.

I looked down and say the cutest tiny black ball of feathers attacking me. He could only jump about half way up my calf so I barely noticed but if it had been a kid or if I had bare legs it would be a less amusing memory for sure.

Right now I have more roosters than I need (or want) including 2 bantam EE’s and 3 Silkies along with a handful of full sized roosters. The big guys fight among themselves but they seem to leave the little guys out of it.

Maybe they don’t see the bantam roosters as a threat, maybe the banties are too quick. I don’t know why, I just know that the bantams aren’t getting beat up like the big guys sometimes are.

You Have to Buy Straight Run

Speaking of roosters, bantam chicks are tiny and I’ve only seen them sold straight run. That means they’re sold with roosters and hens mixed together as they hatch.

If you’re lucky you’ll get a 50/50 split. But even that will leave you with too many roosters.

And that concludes my master class on bantam chickens. Do you keep them alone or as part of a mixed flock with standard sized breeds and other kinds of poultry?

Make sure you PIN this to your homesteading or chicken boards!