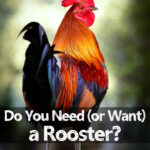 Roosters are the ornamental, loud and potentially aggressive icons of the barn yard. They’re hard to avoid if you keep chickens but are they necessary?

Roosters or male chickens make up roughly half the chickens hatched at any given time. That’s right, chickens aren’t like alligators and you can’t mess with the temperature in the incubator to hatch only hens.

Every once in a while I’ll see someone on Facebook claiming that if you keep the temp at X and the humidity at Y or only hatch eggs that are a certain shape you’ll be guaranteed all hens! Nope, sorry, not gonna happen.

If that was possible don’t you think the multi-billion dollar egg industry would have figured out a way to avoid dealing with the unneeded male chicks?

The point of that rant is that if you keep chickens long enough you will end up with at least one rooster.

Index hide
1 Do You Need a Rooster?
2 Reasons you Want a Rooster
3 Rooster Problems
4 How to Avoid Roosters
5 How to Get Rid of Roosters

Do You Need a Rooster?

The number one question you get about roosters is “Do hens need a rooster to lay eggs?” and the answer to that one is 100% no. Commercial hatcheries produce lots and lots of eggs with no roosters in sight.

Without a rooster you will still get eggs but they won’t be fertilized and you won’t be able to hatch them. That might be perfect for you if the idea of eating fertilized eggs freaks you out!

Read more about What to Expect from Farm Fresh Eggs

Unless your goal is a self-sustaining flock that can reproduce and give you tiny fluffy babies you don’t need a rooster. But, you might still want one!

Reasons you Want a Rooster

I have a large free-range flock complete with several roosters. At the moment I have too many and it’s causing some issues but we’ll get to that a little later.

Over all I think the good outweighs the bad when it comes to keeping roosters in my flock.

Flocks of chickens maintain a hierarchy or the “pecking order” where some chickens are on top and some are on the bottom. Top chickens get the better sleeping spots and first choice for food and nesting boxes.

If you have a rooster he will most likely fill in the top spot (unless you have a bantam rooster and full-size hens, that seems to throw off the dynamics a bit).

My roosters have created zones in the back yard, I don’t fully understand the breakdown but the top guys have their own hens and they tend to be in the same areas every day.

When they maintain their zones the backyard is a largely peaceful place. Issues do arise when new roosters are added or more likely grow up and the hormones kick in. We will circle back to that in a bit.

My favorite reason to keep roosters is that they look out for their ladies. The best roosters will find them food, keep them safe from other roosters and will go to bat against a predator.

If a good rooster finds some tasty morels he’ll call his ladies over for first dibs. One of my tests for a ‘good rooster’ is watching how he treats his ladies.

I want a gentleman that treats his ladies well, does little dances of seduction, and doesn’t just hop on and rip out a bunch of feathers.

Going back to that zone thing I mentioned, each rooster has a harem and a spot. They do a pretty good job keeping and other roosters away and limiting the aggressive mating behavior from them.

The final way rooster show off that protective instinct is with predators. Unfortunately for the roosters, they don’t always survive.

I would never rely on a rooster to project a flock but roosters will alert hens to danger and give them time to escape while acting as a distraction or actually fighting. There is only so much a bird, even one with impressive spurs, can do against a fox or coyote.

If you’ve ever raised a group of chicks you probably picked out a favorite, it was the prettiest and the friendliest. And of course, a rooster.

I think a lot of that is the universe playing cruel tricks on us but it’s also that roosters are just way fancier. Don’t get me wrong, I have some gorgeous hens (blue laced red Wyandottes are hard to beat for pretty hens) but the roosters always put them to shame.

It’s similar to peafowl. The hens tend to be plainer with solid colors, all-over patterns, or simple coloring like the black patches on a light Brahma.

Roosters on the other hand are fancy with a variety of colors and patterns on the body, with contrasting tail, saddle, and hackle feathers. Add to that the larger comb and wattles and you’ve got a Barnyards Next Top Model contestant on your hands.

You knew we’d end up here. Keeping chickens isn’t all sunshine and rainbows and specifically keeping roosters has a few serious dark spots.

Roosters have a strong protective instinct and usually that’s a good thing but it can go into overdrive and lead to a hostile barnyard.

Not all roosters are aggressive with people but the ones that are you won’t forget. Roosters have strong wings and sharp spurs and they’ll attack you with both.

In my barn, I have a zero-tolerance policy for human-aggressive roosters. I’ll give a little slack if I can see how my actions caused a specific attack but if they go after my kids they’re done.

If you only have one rooster and you need him or you’re particularly attached to the little jerk you can try to emotionally rehabilitate him.

Large roosters can easily reach a child’s face and eyes and do serious harm. It’s not worth it, get rid of them.

In my 10+ years of keeping chickens I’ve only had 5 or so that were problems out of probably a hundred. 3 of those 5 were Easter Eggers.

Rooster on rooster aggression is something you’ll have to deal with if you have more than one. Every once in a while I’ll have to break up a fight or treat a wound but it rarely goes that far.

I have noticed that my lower-tier roosters end up in the front of the house away from the barn. Sometimes they even avoid going in the barn at night leaving them open to night-time predator attacks.

This struggle never really stops, you’ll have more peaceful moments but it gets upended when the young roosters hit puberty or winter arrives and you spread out flock is forced to share a smaller space.

Read more about the Challenges of Winter Chicken Keeping

Hens can easily shuffle down the pecking order as they age and remain safe and healthy. The same process is much harder on roosters.

My daughters have named our fluffy grey Cochin “Super Fluffy” because they claim he protects them from the ‘mean rooster’ (bantam EE).

Super Fluffy is a few years old now and he’s getting shuffled down the pecking order. He’s a big boy but he’s always been on the docile side.

I’ve spent a few nights looking for him after dark when he hasn’t come in. I’m in the process of getting rid of most of my younger roosters and I’m hoping that will eliminate the problem.

Something similar happened with Flamingo after he healed from the broken leg. He ended up spending most of his time in the front yard away from the younger men (and the prime food spots).

If you live in a suburban or urban area don’t get a rooster. They are LOUD.

Roosters don’t only crow at sunrise, it’s basically an all day thing. And that sound carries, if you have close neighbors they’re not going to like you.

The more roosters you have, the more they will crow, so if the sound really bothers you but you want a rooster (maybe you want some babies?) stick with one.

There are “no crow collars” you can put on a rooster that are supposed to muffle the sound but I’ve never used them. Roosters crow, it’s part of the deal, if you don’t want crowing don’t get a rooster.

That crowing can even get you in some legal trouble.

Chickens are becoming more popular (and legal) in suburban and urban areas. Most places that allow them to have a limit on the number of birds you can keep and some places specify that only hens are allowed.

How to Avoid Roosters

After reading all of that you might have reached the conclusion that roosters are not for you. I don’t blame you there but it’s not always that easy of a goal to achieve.

The only way to absolutely guarantee you never get a rooster is to buy older birds. You can buy sexed chicks, either ordering day old chicks online or grabbing a fluffy half dozen chicks at Tractor Supply Co but it’s not a 100% guarantee.

The act of chick sexing is really more of an art than a science and most hatcheries only promise a 90% accuracy rate. Just about everyone I know that has ordered sexed chicks has gotten a rooster or two with their ‘all-female order’.

How to Get Rid of Roosters

The obvious answer to the too many roosters problem is to eat them. I have eaten excess roosters in the past and while it’s not a process I enjoy it’s not particularly hard.

However, it’s usually winter by the time my extra spring roosters are big enough to eat and I don’t have a good indoor set up so I post an ad on craigslist or Facebook giving them away for free. So other people can eat them.

I’m surprised you haven’t known about a velcro loosely wrapped around a rooster neck will allow him to eat and breath but not crow to bother my neighbours I have used this method and everyone is happy , it’s cheep it works allow one finger under the Velcro when applying it he will try to remove it after a few day he won’t even know its their make sure you keep tabs on him to ensure it’s not to tight, a rooster needs to take in a quick amount of air to crow , my rooster has produced my third generations of hens with out crowing I don’t look forward to the day I have to replace him he is such a gentle man and likes to be picked up and cuddled as do my hens oh make sure you cut off the extras Velcro so he can’t unwrap it . Please let me know how you made out.

I was given a roo just like the one at the beginning of this post, The redish and blue green feathers,,, Can you tell me what flavor he is?