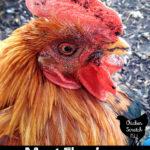 Writing this story feels like tempting fate, but it’s too crazy to keep to myself. Today I’m going to tell you about Flamingo, my rooster that doesn’t know how to die.

The name is new, it happened by accident. I’ve always been superstitious about naming chickens, the second you name them something awful happens, they die and you feel worse because it had a name.

After everything he’s been through I had planned on giving him a bad ass survivor-type name, but he stands on one foot a lot so he’s Flamingo.

I will warn you that this gets pretty graphic at the end, on the bright side you get to go into this story knowing he’s going to be ok at the end. You’ll also find out why my fingers have been blue since the end of October.

Flamingo is a Welsummer rooster, literally the Kellogg’s cereal mascot. I got him from Cackle Hatchery in 2016. The order was supposed to be all pullets so really that was first time he got lucky.

2016 was the year of roosters and I spent a lot of time staring them down and figuring out the barnyard dynamics.

You don’t need any roosters but I like to keep a few because chicks are fun and a good rooster will take care of his ladies. Flamingo is a good rooster.

He’s a sweet guy, he does little dances for the hens, doesn’t rip out all of their feathers and has never shown a tiny speck of aggression toward a person. That’s why he’s made it through year after year of rooster removal.

Flamingos first brush with death happened his first summer. 2016 was a bad year for foxes, or a good year for the foxes and a shitty year for everyone else.

I was on the deck, probably doing something dumb like painting a stick or maybe taking pictures of a recipe I never posted when I heard commotion. Noises are pretty standard in a barnyard, this was different.

I looked up just in time to see a fox jump out of the overgrown iron weed and grab young Flamingo. My completely rational response was to start screaming and run after the fox with a shovel.

For whatever reason it worked, the fox dropped the rooster and he walked away without a single mark on him.

Later that year Flamingo, potentially looking to relive the adrenaline rush you can only get by escaping the jaws of death, found himself hanging out in the road.

The roosters divide my property into zones that only they understand. The weaker, younger and less assertive roosters get pushed into the front yard while the high ranking men control the barn, the field, the woods and the backyard.

One day after work I came home to find Flamingo sitting under a tree. Unusual, but chickens do dumb things (like stand in the road…) so I didn’t think much of it. Until I walked over to him and he didn’t run away.

He did a half-hearted hobble jump and sat back down. I picked him up, looked him over, took him to the porch and set him up for the night.

By the next morning he was walking with a bit of a limp but otherwise fine and he went back into the flock.

Which brings us to present day. This is Flamingo last summer, when he was running things. He doesn’t look quite as regal at the moment.

A few days before Flamingo took on a Honda I lost two ducks to an unknown predator and found a third with holes in her neck and covered in blood.

The duck got patched up and spent a few days in a tub on my porch. It’s not even a porch at this point, it’s a poultry ICU. The bandages came off on Sunday and she went back to join the only remaining Ancona duck.

On Monday, October 28th, my babysitter sends me a message. “Hey I just put one of the chickens in the breezeway. Bloody! It was just laying in the corner inside the fence.”

She also sent a few pictures like this one:

Even now looking at that picture my gut feeling is there is no way he’s going to make it through the night. His face shouldn’t be that purple, and it’s not a camera lighting thing, he really looked like that. I didn’t think he’d make it an hour until I got home.

But he was alive and he was bleeding a lot. When I picked him the there was a red puddle underneath him. It wasn’t the dark red you’d see if you pricked your finger on pin.

It was a cheerful bright red that belonged in a children’s cartoon, not in a sticky mess of wood shaving and feathers. It was clear pretty quickly that the blood was coming from his spur where the tip had broken off.

He didn’t have a lot of fight left in him, I wrapped him up in towel and he just laid on his side. I sprayed him down with Vetericyn, packed the spur with corn starch to stop the bleeding and wrapped the whole thing with cotton pads and vet wrap.

My girls were helping and they put extra shavings in the tub to make him comfortable. When my three year old asked me if he was going to be ok I didn’t know what to tell her. At that point I would have bet money he’d be dead by morning and I don’t lie to my kids.

Mary had my back and I heard my own words “we’re going to try our best” being used to comfort her little sister. That’s really all we can do is try, again and again and again. Every time we fall, get up and do it again.

For the most part that’s my rule with the animals (and my kids and my friends), if they’re trying I’ll try. If they give up I’ll stop. I know he was uncomfortable and in pain, but he was also eating and acting like a rooster so I wanted to give him a shot.

Stopping the blood had taken up most of our evening so we let him rest and got ready for bed. I was not looking forward to the morning and I spent the night not sleeping and trying to figure out what has happened.

I have a 4 foot fence that in theory keeps the birds out of the road, a few have figured out how to get past it but there was no way he made it over the fence with a broken leg. A rooster fight or a predator didn’t really make sense, the injuries were wrong and no one else was roughed up at all.

The next day he was still alive but clearly in bad shape. I fed him before work and again, fully expected to find him dead when I got home.

Flamingo had other plans. I got a better chance to look him over that night. His spur had stopped bleeding but his face was covered in scabs, one eye wouldn’t open, his beak was chipped, his wing was drooping and his leg was broken.

I also got a text message that morning from my neighbor that another neighbor had seen him get hit by a car and moved him inside the fence so he wouldn’t get hit again, which is where my babysitter found him. Mystery solved.

After a gentle scrub with warm water I got the eye open, and luckily it was fine. I sprayed his head down with Vetericyn to help the abrasions heal and then turned my attention to the leg.

The scales on his leg had started to peel and you see that something was very wrong. This time I went with Blu-kote on the leg, cotton pads (they stuck and I should have used bandages but I didn’t have any), a Popsicle stick and another round of vet wrap later he had a splint. It wasn’t tight enough to interfere with swelling but it kept the break straight.

This was the same leg with the broken spur. That’s the nub sticking up above the break.

He gradually got better, over the week he started to stand on his good leg a little more, he was eating and even started crowing, loudly, in my house.

Things settled down and I thought we’d made it out of the woods until Sunday morning. I went out to check on him, and I realized things had taken a hard turn south.

There was an unmistakable smell when I picked him up. Now there are good scents, like hot coffee, October and that hot guy you tricked into taking you out on a date. This wasn’t that kind of smell.

A few summers back my alpaca Fred had flystrike, I won’t get into the graphic details but she had a a patch of dry cracked skin taken over by maggots. I’m sure you can imagine that is not a pleasant odor.

That’s what I smelled, at first I thought the leg had gotten infected and it was over. But his leg was fine.

That’s when I noticed the droopy wing, and something moving in it.

It was right along the top of the wing. If we were talking about chicken wings (which we shouldn’t because this gets GROSS) it would be the joint where the drumette meets the wing.

He must have scraped away the entire layer of skin on the road, it was covered by dark feathers and with everything else going on I didn’t even notice. The flies did.

There are times in my life when I want to give up, but, for some reason, sitting in a doorway holding a rooster burrito and picking maggots out of an open wound was not one of those times.

I was angry, I was crying and there may have been a 5 minute stream of expletives that would make a Hells Angel blush but we both got through it. Between the hot water, Vetericyn and my fingers I got the maggots out and doused the whole area in Blu-kote.

He went back in the tub to wait it out and see if my mistake was going to be his undoing.

This is where I found him this morning:

Flamingo is doing good, no more maggots, he’s standing on his leg a bit more and doing more moving than he probably should. He’s lost quite a bit of weight, which isn’t that shocking.

He’ll be on the porch for at least another month. I need get another tub set up to keep him contained, Blind Chicken and her club took over the ICU when winter arrived (uninvited, rude).

The porch is unheated so he will be able to acclimate to the cold and I’m really hoping he won’t have to spend the whole winter in the house. He’s a REALLY good alarm clock but I prefer one with a snooze button.

I’m also getting ready to do another rooster cull so he’ll have less competition. At this point I’m pretty attached to him and he’s staying here for good.

Hopefully he learned his lesson about cars but over all chickens are pretty dumb so I’m not getting my hopes up.

Make sure you’re following me on Instagram where I post farm updates and there be lots of Flamingo in the stories for a while.

Check out my Livestock page for more about my chickens or start here: