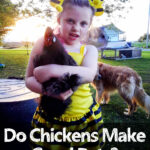 Chicken popularity has been on the rise lately, especially as we’re all scrambling to lock down a reliable food supply. But fresh eggs and chicken noodle soup aside, do chickens make good pets?

I’ve spent most of my adult life owning chickens. The vast majority have been raised in the backyard, living in a barn as livestock.

While I love and appreciate my chickens there is a definite distinction between how I see them and how I see my dog (for the record, he is my first child and you’ll never convince me otherwise!)

I keep them safe and fed, I take care of them when they’re injured and I drop everything and run outside barefoot in the mud whenever I hear I hawk but they’re not pets.

Until last summer. I was contacted about taking on a trio of chickens that had been raised more or less as house pets. I brought them home thinking after a quarantine they’d be good to join the rest of the flock.

The two hens, Chippy and Bonnie, were friendly enough but the little boy Dash? He was basically a teddy bear in a chicken costume.

He was small, even for a silkie, and that long with his complete lack of chicken instincts meant he wouldn’t have lasted an hour in the backyard with the rest of the roosters.

Bonnie, Chippy, and Dash lived with my blind chicken for a while and then lived in a separate coop on the lawn.

Unlike most of my chickens that maintain a healthy distance when we’re out and about these three had no fear. They’d wander up to our picnics and try to eat right off our plates.

Dash took that lack of fear even further and joined us in the house on many occasions (don’t tell my mom about this ok?). Thankfully he came with a chicken diaper that helped keep his mess contained.

The diaper did not manage to keep the canned cat food he loved to snack on off of the walls, fridge, and oddly, cats.

He was very small and underweight. I treated him for worms and fed him chick food, sunflower seeds and cat food to try and get him to gain weight but it never helped much.

Our little black silkie had a starring roll in stay-at-home-school show and tell, watched Frozen 2, listened to books at bedtime, and went to my sisters for a socially distanced birthday celebration.

Then last summer I found that Dashy-boy (Mary’s name for him) had died in his sleep. We had just lost Flamingo a month earlier and another chicken funeral seemed overwhelming.

And it was, there was hysterical crying from the girls, quieter crying from me, and overall three very heartbroken people. Dash was our buddy and he was truly one of a kind.

Losing Dash really got me thinking about the difference between raising chickens as pets versus keeping them livestock.

As far as I can tell is chicken keeping is a spectrum. Ranging from diaper-wearing house pets to warehouse-style barns packed with corporately owned chickens.

On a scale that wide it’s likely that most of us are closer to diapers than the KFC training grounds but really it comes down 100% to personal choice.

I’m not going to tell you what to do. I’m just going to give you all the information I have and allow you to make your own decision.

Chickens absolutely can make good pets. It largely comes down to how they’re raised but what kind of chickens you pick and how many you have can play an important role.

Best Breed of Chicken for Pets

If you’re in the market for a pet chicken look for a breed with a calm and docile personality. It’s not a guarantee you’ll end up with a cuddly bird but the chances are better.

Think of chickens kind of like dogs, there are lots of breeds and they all have different personalities.

Silkies are a great choice, they’re known for being friendly and they’re pretty small. Other bantam breeds (small chickens) you might consider are Cochins or Brahmas.

The smallest chickens you can find are Seramas, these guys are tiny. They stand less than 10 inches tall and their small size makes them much more delicate than other types of chickens.

If I was in a very different situation and I could only have 3 hens I would pick one Brahma, one Cochin and one Marans. They’re all large, fluffy, calm breeds and solid layers.

Even if I was keeping them as pets I would still want those delicious fresh eggs! And stick with the ladies, Dash was truly one in a trillion.

Roosters are generally more outgoing but they’re also much more likely to get aggressive as they grow up.

How Many Chickens Should I Get?

Numbers play an important role in exactly how friendly your chickens are. I have, uh, lots of them.

If you want a nice, friendly, easy to handle flock of birds you gotta keep it small. That way you have time to give them all individual attention and acclimate them to being handled by people which literally goes against their survival instincts.

I would never recommend you have fewer than 3 chickens. Chickens are flock animals and find comfort in other chickens. A lonely chicken is a sad chicken.

The best way to get friendly chickens is to handle them daily from a young age. Chickens are a prey species and you need to do some work to eliminate that “oh crap I’m about to get eaten” instinct so they don’t panic every time you pick them up.

This is where I really struggle with the pet chicken issue. I want my chickens to have that fear reaction. I want them to run when they see a dog (or fox or coyote) or a person they don’t know.

Chickens aren’t that loud but they do make noise. Especially when they lay eggs, get upset or scared.

It really varies from bird to bird but some of my ladies start singing their egg song 10 or 15 minutes before they lay an egg.

Roosters on the other hand are very loud. I kept Flamingo on my porch for a few months and I could tell when he was recovered because I could hear him crowing across the house in my bedroom.

They scratch and fling food, water and bedding, they poop CONSTANTLY and they’ll peck and know over anything that isn’t bolted down.

Can you House Train a Chicken?

You can’t house train or litter box train a chicken. Adult chickens poop every 20-30 minutes and those little poops add up quickly.

Please don’t keep chickens in your house. If you want to bring them in for the occasional Disney movie or to eat a can of cat food that’s another story.

But for real, chickens belong outside. Full Stop.

How Long do Chickens Live?

Chickens generally live between 5 and 10 years. I’ve found mortality to be highest in the very beginning as chicks, that’s when they’re the most delicate.

Once you get them through the sudden death stage and move them outside you’re more likely to see death via predation or accident like getting stuck in a fence, hit by a car, or drowning.

My oldest chicken was an ancient Brahma from my original flock I started in 2011 who passed away in November 2020 at 9.5 years old.

She’s was the only one left after Blind Chicken died this summer. She died peacefully on a beautiful sunny day and I was happy she didn’t end up struggling through cold winter.

Most of my chickens don’t live that long. I allow them to free-range and between the hawks, foxes, and cars it can be a struggle.

Why I don’t Want Pet Chickens

My reasons for not wanting pet chickens are entirely selfish. The number one reason is I don’t want a strong emotional attachment to an animal that can be snapped up at any time by a hungry red tail.

I already have anxiety and I need a little bit of distance between me and my birds or I would literally never sleep again. It’s bad enough when “Super Fluffy” the Cochin my daughters named hides at night and I have to search for him in the dark.

I briefly touched on it before but I don’t want fearless chickens. I want them to have that street smart (barn smart?) instinct that tells them to get the hell out of dodge when danger shows up.

If fewer chicken cuddles mean my birds live longer I’m ok with it, I’ll cuddle with my cats and dog and let the chickens be chickens.

Chickens are perfectly happy being livestock, living in a barn, scratching for bugs and rolling around in a giant dusty pit they dug in the middle of my lawn.

It is very hard to have a small, vulnerable, outdoor pet. There’s a reason my cats are indoor only, I want them to live!

Do you raise your chickens as pets or livestock? I would love to know where you stand in this debate.

We had a chick break a leg and my daughter carried it around for 6 weeks and it even slept with her and that bird became house trained. We even took it on car trips and just pulled over for potty breaks once in a while. When she got older she went outside with the other birds but came in to watch movies and spend time with us and she never went to the bathroom in the house, not even when my daughter snuck her inside for a sleepover. Sadly she was eaten by a predator and left a huge whole in our hearts. Thank you for your article.