You are here: Home / Farm / Barnyard Birds – There’s More to Life than Chickens 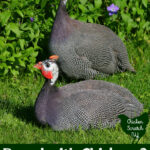 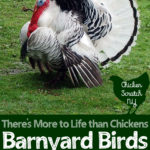 Chickens are unarguably the gateway to farm life. If you’ve dipped your toes in the small farm, homestead or hobby farm lifestyle I’m sure you’ve read all about keeping chickens.

But do you know about the other kinds of barnyard birds? Right now I have ducks, geese, turkeys and guinea fowl all living together with the chickens.

Where do you get them?

You can order them online like chicks or find them from someone local. Hatchery birds should be certified disease free and healthy. I love Cackle Hatchery, I’ve got a batch of ducklings and guineas coming from them this June.

If you decide to buy birds from someone locally make sure you keep them quarantined for 6 weeks. It works out pretty well for babies, they usually stay inside that long. But it can be tricky with older birds.

I’m a huge heritage livestock fan, if you’re looking for birds with a cool history the American Livestock Conservancy is a great place to start. They have lots of information on heritage breeds of ducks, turkeys and geese.

After chickens I think ducks are the most popular birds. Right now I have a rag-tag bunch of ducks that I got in a trade for a bunch of unwanted roosters.

I have a Rouen (Oreo), an Ancona (the sole survivor from last years ill-fated batch of 10, 6 were killed as ducklings by rats in the brooder, 2 were taken by a bob cat and one was hit by a car) and 2 brown ducks that may be a buff Orpington and a Khaki Campbell but I’m not 100% sure.

In the past I’ve had muscovy ducks and I really miss them. They’re also much harder to find than standard ducks. They’re much quieter because they don’t quack, they hiss.

The ducks are my youngest daughters favorite barnyard animals but they also have a job. The alpacas and I need them for snail control.

I’m not willing to use pesticides in the field so ducks are my last hope. If you’re wondering why my alpacas need pet ducks, the snails carry a parasite.

Meningeal worm is a white tail deer parasite that can kill alpacas. We had not one or two, but three cases in my very small herd of 4 alpacas. That’s a very good reason to want the snails gone!

Ducks are not hard to raise. You don’t need a pond or lake but they do require a bowl of water deep enough to dip their faces and keep their nostrils clean.

I keep a large kiddie pool in my back yard that I dump and refill a few items a week during the summer. Ducks (and geese) are much messier than chickens.

In the winter I refill my large rubber bowls a few times a day. No matter how cold it is you’ll find a duck standing in one. Makes me cringe every time!

The messy nature of ducks always goes back the their love of water. Along with making a huge mess in their water bowls they have wet poop.

The ducks and geese are the main reason I never keep water in my coop, it’s either outside or out in the main area of the barn. I use the deep liter method in my coop and I want to keep things as dry as possible.

Most ducks don’t roost, Muscovy are the exception. Mine used to hang out on the roof just for fun. I like to keep a very deep litter during the winter to help keep the ducky friends warm on the ground.

They’ll also lay their eggs on the ground. Out of all the birds I have the ducks are most likely to lay an egg anywhere. Out on the lawn, on the deck, occasionally in the coop… Now that I’m home all the time I’ve been opening up the coop a little later to try and get them to lay their eggs where I can find them.

Ducklings are a nightmare in the house, they are messy and smelly and you’ll be counting down the days until you can kick them out.

NEVER EVER feed ducklings medicated chick starter. They will die.

I feed mine un-medicated game bird starter. Get the highest protein you can find, 28% if they have it. You can also supplement with brewers yeast for niacin.

Like with chickens you can get ducks for meat or eggs, and like with chickens there are ducks that do both moderately well. The most common meat ducks are the white Pekin; Muscovy (very different flavor) and Rouen will also give you a large bird for the table.

Did you know that there are duck breeds that will lay more eggs than the average chicken? The Khaki Campbell is a slight bodied tan duck that can lay 340 eggs a year!

To be fair, that’s an exception and you’ll be more likely to get around 200. That puts them about even with my Wyanodotte hens.

If you’re looking for hilarious ducks you can’t go wrong with Indian Runners. The best description I can come up with for Indian Runners is a bowling pin with anxiety.

They are very upright when they walk. They’re amazing and hilarious.

Guinea Hens are loud. Louder than geese. They also love to roam.

While chickens are generally happy to hang out at home guinea hens are always on the go. Which is both helpful and annoying.

The biggest pro for guinea fowl is that they are tick eating machines! I’ve had zero ticks on me, my kids or my dog since we got them.

On the not-so-bright side, they look like evil clowns.

Another on the cons list, guinea hens can be bullies. I have two of them right now and they bully my turkeys. Guineas are about the size of a large chicken and they terrorize the tom turkeys.

They’re also pretty crazy. Once I saw the group chase off a fox. I don’t think the fox was expecting a flock of pissed off evil clowns to jump him that day.

They lay triangular eggs, it sounds odd but if you see them that description makes sense. Mine have always hidden their nests, one I found in the garden and a few others out in the tall weeds fo the back field.

I have never had luck letting them sit and hatch.

Guinea Hens in the Brooder

Baby Guinea fowl are called ‘keets’ and they’re tiny. They have a well-earned reputation for being fragile, at least for the first 2 weeks.

Guinea fowl are from Africa (they even make an appearance in Wild Kratts season 3 episode 6! That was Mary’s favorite show for a long time and we’ve seen every episode 150 times) and they are made for hot, dry weather. Even damp grass can kill a small keet.

I’m not a big fan of making more work for myself but when I have guinea keets I keep them separated from the chicks until they’re a few weeks old and more sturdy.

Ordering keets can be a real pain in the butt too, a lot of hatcheries won’t ship them with other birds (again, fragile) so you need to get 15+ at one time.

Put marbles in their water to keep them from soaking or even drowning themselves. The marble trick also comes up a lot with turkeys. Speaking off…

I have raised both Royal Palm and Bourbon Red turkeys. All the BRs went in the freezer, along with most of the RPs.

They are the least useful birds I have but they’re also my favorite and my oldest daughters favorite, my youngest is a duck fan.

I had a replenishing flock for a few years until a huge storm and a pack of coyotes collided and took me down to Gobbles and Henrietta. They did an OK job hatching and raising poults but I had better luck hatching the eggs myself in an incubator.

We lost Gobbles in 2017 and started again with a new batch of poults in 2019. I ended up with 3 toms and 2 hens, I’m almost constantly posting videos of them on Instagram. They are my (very obnoxious) happy place.

Turkey poults have a reputation for being dumb. I didn’t see that but some people recommend you put marbles in the water so they don’t drown.

I’ve raised them with other turkeys and with chicks. Poults are a bit larger, they have longer legs and they have a little pimple on the top of their beaks.

You can usually find something called ‘Game Bird Starter’ which is unmedicated and has more protein than chick starter.

Adult turkeys get much bigger than chickens. They can be intimidating if you’re used to small 6 pound birds. Even my Royal Palms are pretty big compared to my larger chickens and they’re a small turkey breed.

Turkey hens are fairly calm. I love the sounds they make too. It’s a very soft, throaty sound.

Tom turkeys are another story. They can get aggressive. Gobbles hated my ex-husband. He would jump at him any chance he had. He would even go after me if I was dressed like my ex in similar boots and jeans.

Gobbles used to court me, I think he saw me as a potential mate and Mike was his competition. I also watched him seduce a garbage can for 2 hours via game camera so… Not the brightest bulb.

After Henrietta disappeared (nesting in the woods isn’t a great hobby) Gobbles lived out the rest of his life harassing my ex-husband and wild life and hanging with the guinea hens.

We have a lot of wild turkeys that cross through the field behind our property. One day I heard a huge commotion and when I looked out the window I saw Gobbles had called in a big wild tom.

That was pretty cool but the amazing part was watching his guinea buddies run up out of nowhere. They yelled and attacked the poor wild turkey and chased him past the fence line.

You can have parasite problems keeping chickens and turkeys together. It’s called Blackhead and I’ve never had to deal with it.

Talking to other turkey raisers it seems to be something you hear about a lot more than it seems to actually be a problem. If you plan to keep a mixed flock you should look into blackhead in your area by talking to your local Agricultural Extension.

I’ve said quite a bit about my geese already in a very snarky post where I question whether or not geese are evil.

Much like ducks they are very messy. I’d honestly say even messier, Geese are giant, messy ducks with anger problems.

The goslings are cute as hell. And they are awful to keep in the house. I wouldn’t recommend it past a few weeks.

I moved mine into an outdoor coop with a heat bulb because I couldn’t handle the stink. They will tip the water no matter how you try to avoid it.

They’re loud, can be aggressive (especially in the spring) and leave giant wet poops all over.

I think chickens are the easiest out of all of them (not that they aren’t without their own issues). A flock of hens is nothing compared to the rest of this bunch!

What kind of barnyard birds do you keep? Have you ever tried one out to find it wasn’t for you?

Don’t forget to PIN this post to your Homesteading or Chicken Board!