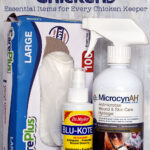 If you keep chickens it’s only a matter of time before one gets injured. As hard as that is, it’s even worse when you’re unprepared. Save your future self come anguish and put together a chicken first aid kit before you need it.

Fun fact, chickens are constantly trying to get themselves killed. Another fun fact, you can usually put them back together.

This post does not contain any gross images but there are some descriptions of injuries & ailments.

Common chicken injuries include broken (bleeding) blood feathers, cuts, animal attacks, and heat stress. Despite how fragile they seem, chickens are really good at healing those kinds of wounds.

Illness is another story, even if you’re an experienced chicken keeper it can be hard to see that a bird is sick. They are really good at hiding sickness from the flock and by default, you.

The main things to do when helping an injured chicken are:

Most of the minor chicken wounds I’ve seen are from an overzealous roosters spur or snagging themselves on something like fence wire. Chickens that aren’t molting have a lot of feathers that tend to keep them safe from injuries.

Read more about The Fall Molt & Your Flock

If the wound is small and hidden by feathers you can clean it up and give it a spritz of BluKote and the bird should be safe to rejoin the flock.

If it’s a larger injury you should keep the bird separated. Chickens are vicious and they’ll attack (potentially kill) an injured bird.

I keep my injured chickens in a large black tub on my porch. It’s the same set up I use for raising chicks minus the lights.

The tub keeps them where I can keep an eye on them and it keeps them from moving around a lot. If they seem stressed I toss a blanket over the lip to calm them down.

It is critically important to keep flies away from a chicken with open wounds. I can not stress this enough.

If you have an open wound and green bottle flies find it, they will lay their eggs in it and you will get to pick maggots out of a living animal.

Now that I’ve traumatized you, on to the first aid kit supplies.

Most of this stuff can be kept in the barn or coop but a few things shouldn’t freeze so if you’re in a frozen wasteland like me, keep it under the sink where it’s not in the way, your kids won’t drink it and you know where it is.

I keep it all together in a dish basin along with a towel that I can use to wrap up a bird and keep the wings from slapping me.

Buy a big box of disposable gloves. I’ll admit I’m pretty bad about wearing them but there are times when they’re necessary.

They really came in handy when my alpaca Fred had a nasty reaction to a different brand of Ivermectin and ended up with not one but two abscesses roughly the size of softballs.

After they finally opened I had to stick my finger in, twice a day, until they healed from the inside out. The vet was there for the initial opening but after that, it was all me.

If you’re curious about why I was sticking my finger in an alpaca, when you have a large abscess you need to keep it open so it continues to drain. If not the hole will heal over and it will continue to refill.

Bringing it back to chickens, they can carry some nasty bugs and you should protect yourself. Bumblefoot is a pretty common foot infection that’s usually caused by Staphylococcus aureus bacteria.

It’s also nice to not have blue fingers for a week thanks to Blu-Kote overspray.

Blu-Kote is an antiseptic & antifungal wound spray that dyes EVERYTHING blue. The blue color does a great job covering up blood.

If your chicken has a small cut that’s not worth putting her in isolation, just give her a quick spray with Blu-Kote and you can send her back to the flock without setting her up for mob violence.

Chickens are basically sharks, blood will set them off like a herd of 5-year-old girls at a Disney Princess Convention.

Here you can see Flamingos broken leg is blue. As the injury healed the old skin was flaking off around the break, I sprayed it blue so I could see where new skin was growing in.

I’ve also used it on my dog. Alfie is a golden retriever with a lot of hair and he went through a phase where he was chewing his skin (food allergies).

He would end up with small sores on his back, his hair would get in the scabs and they’d be hard to keep track of. I trimmed down the hair as close to the skin as I could and sprayed the spots with blu-kote.

It made the spots easier for me to find, he stopped licking due to the gross flavor and the antiseptic helped heal the wound over.

The best advice I can give you about Blu-kote is to use it outside (not in the wind) in old clothes. It will dye your skin, your clothing, your couch, your floor, basically anything it touches.

It comes in a pump spray and an aerosol spray. I’ve used both, the aerosol has a finer mist but it’s easier to go overboard with it.

When I’m not reaching for my trusty Blu-kote I’ve got a bottle of Vetericyn or MicrocynAH in my hand (different brands). From what I can tell it’s not actually a supernatural magical healing spell, it’s a skin safe bleach derivative called hypochlorous acid.

But for real, it might as well be a magic wand. The first time I used it was on Blind Chicken (a few years before she was blind) when she had a cut under her wing.

Warning: I’m about to talk more about maggots

The cut was filled with tiny maggots.

I caught it quickly, she was sitting on eggs at the time and I had pulled her off the nest to check them when I noticed tiny squirming maggots in the nest box.

I moved her next door and cleaned out the box, moved her and the eggs back, and found more maggots in the box I had just pulled her out of. That’s when I realized she was the source.

It was a small cut on her bare skin where she had pulled out the feathers for skin to egg contact. It was just over an inch long, but it had a flap.

I cleaned it out with warm water to remove all the larvae and any remaining eggs and gave her a good hearty spray down with some Vetericyn. I checked her the next day and she was good as new.

Since then I’ve used it for the chickens including the Almost Headless Chicken & Flamingo, alpacas, ducks, my dog and even myself (it’s not for human use, so don’t do what I do).

I reach for it anytime I need to keep an eye on how something is healing, Blu-kote hides a lot, which is great if you need to cover up blood on an animal that’s going back in the flock, not so great if you’re trying to see how a wound is healing.

Vet wrap is a self-adhesive bandage wrap. It only sticks to itself making it perfect for our feathered friends.

You can buy it in rolls of different colors and widths. I’ve used it to hold a splint on a broken chicken leg, to hold a bandage on a duck’s neck, and to hold an ‘angel wing‘ in place.

I’ve also used it to hold a splay-legged goslings legs together. After my geese had hatched 2 babies they left the nest and I found 5 pipped eggs with living babies in them.

I brought them in the house to finish hatching in the incubator, 4 made it out of the shells. Two were perfect but the other two were doing the splits. After two days of vet wrapped legs they were good as new.

If you’re dealing with smaller livestock you should be good with the 2 inch width. Or you can get the 3-4 inch width and cut it down to size as needed.

I know this sounds weird but you might find yourself in need of pliers. Long story short, when chickens grow new feathers they have a blood supply.

If those feathers get broken or injured they will bleed. The fastest way to fix them is to pull the feather out.

You can do this with your fingers but sometimes it’s hard to get a good grip and you’re better off using pliers.

Some people don’t like the idea of pulling out the feathers, they recommend using a styptic powder to stop the bleeding. I would rather pull the feather and have it over with but I have used it for other reasons.

When Flamingo was hit by the second car the spur on his broken leg was bleeding pretty badly. I didn’t have any styptic powder on hand and I had to use cornstarch instead. Cornstarch does work to stop bleeding but not as quickly.

The main use for styptic powder is for clipping nails. I’ve accidentally gone too far on Alfie’s nails and on Fred’s nails.

Convinving an ornery alpaca to stand still long enough to apply pressure to stop bleeding is not a fun time. Use this instead.

I touched on this earlier but you should have a spot to keep a bird isolated while it recovers. It can be as simple as a large cat carrier or a dog crate.

Depending on the weather (& the flies) you can keep the bird physically isolated in a pen inside your coop. That way the bird isn’t lonely but it is protected.

If you’re worried about wood shavings or straw getting into a would you can use an old towel or blanket as bedding. You’ll have to change it quite often and you’ll really get an appreciation for how much a chicken poops.

In general I don’t use the heat light for adult birds, the exception is if I find one that was cold and lethargic. A lot of times a really cold bird just needs a bit of heat to perk back up.

I’ve literally brought chicks back from the dead when they’re hatched out and been abandoned in the nest box. Put them under a heat lamp or plate brooder, keep an eye on them and in a few minutes they will start to move around.

One of my ‘tests’ for if a bird is going to get better is if they’re interested in food. Usually the appetite is the first thing to go in a sick or injured bird.

If a bird has a weak appetite it’s important to get as much good stuff (carbs, proteins, fat, minerals) in them as possible.

Some of the foods I give sick or injured birds are: scrambled or mashed hard-boiled eggs (cool them first), chick starter, and wet cat food. The first options are designed to give a chicken everything it needs to thrive and the last is a good way to get some moisture and protein into your chicken, and they really seem to like it.

I also add molasses to their water (change it often, especially in the summer) or give them Pedialyte instead of water. You can buy special Chicken Electrolytes in small packets that dissolve in water.