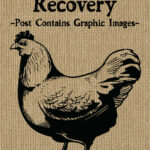 Chickens are a strange mix of delicate and tough as nails. More than once I’ve seen a bird recover from horrific injuries that should have been the end.

About a month ago I walked out to open the barn and found a severely wounded chicken. She was hunched up in a corner of the barn with her head covered in blood.

It was one of my Wheaten Marans, she’s about 7 months old and fully feathered but not fully grown.

This post will contain graphic images, she survived and she’s doing fine but she looked pretty gruesome for a while.

The pictures are gross but mostly out of focus because I took them all with my cell phone while holding the chicken and they’re just not that cooperative.

A Quick Conversation on Illness

A lot of time you won’t know anything is wrong until the chicken is practically dead. I will say I have very limited experience with illness, fortunately it’s never really been a problem for me.

A little bit of bumble foot, some heat sickness, one death by sour crop and a minor case of fly strike. A lot of illness is tied to husbandry and I free range my flock, they’re not stuck in close quarters and they get a lot of fresh air and space.

It’s also possible that the sick birds are picked off by predators and that’s why I don’t see the sickness in my flock.

Having chickens is a bit like having an old school freak show in your backyard. I have seen impossible recoveries, injuries that I would bet money on being fatal and the chickens just shake them off like nothing.

I’ve had a Welsummer rooster get grabbed (and dropped) by a fox, limp around for 2 days and then recover completely. Same rooster was lightly hit by a car, I found him laying on the lawn and after a few days in isolation he was perfectly fine.

He’s still fine, I figured whatever genes he had needed to keep going and he’s one of my main men.

The day after I started this post that same rooster got HIT BY ANOTHER CAR. Seriously. Why. He broke his leg, ground down his beak and injured his wing pretty badly BUT he’s still kicking (hobbling actually) he has his own highlight on my Instagram and I wrote up the whole gruesome story for you: Flamingo

One one particularly fantastic day I popped a wine cork sized pus lump out of a spur hole under the wing of a hen. An overzealous rooster on her back must have made a deep puncture that filled up with that hard, yellow cheese-like pus that chickens get.

That’s only a few examples of ridiculous injuries I’ve seen, after 10+ years of keeping chickens I can go on and on and on. Instead I want to treat this more like a case study looking at one chicken and her healing process after an injury.

This adventure starts on the morning of September 24th. I went out to open up the barn and the coop like usual when I noticed a young French Wheaten Marans pullet standing off my herself with her head hidden.

But her head wasn’t actually hidden, it was so coated in blood that it blended into the dark ground. When I picked her up she didn’t really move or struggle.

Both eyes were closed, most of the feathers on her head were missing, there was a giant gash on the back of her head where the skin was just gone and blood all over.

I brought her into the house, wrapped her up in a towel and tried to dab away the blood with warm water. It wasn’t really helping so I doused her with Vetericyn and set her up with Blind Chicken in the pen on the front lawn.

Blind Chicken has been blind for a little over a year, she usually lives with a Silkie or something small and gentle that won’t beat her up and will help her find food. She makes a good companion to sick chickens because she won’t pick at wounds.

She started drinking and eating that day, I gave her another spray of Vetericyn and left her alone.

The first day is always the worst, I had a pretty good feeling she was going to make it when she started drinking and eating but after she made it though the night I was confident that she was going to survive.

One eye was still shut, I actually thought she might have lost it but it did eventually open. I was still spraying her with Vetericyn and keeping her away from the other birds.

Most of the blood was gone and you could see the injury more clearly, one eye was completely open and she was slow but mostly acting like a chicken.

The deep wound had scabbed over and nothing was wet or bleeding anymore.

By the third day she had both eyes open and she was pretty much a chicken again. I still kept her separated so they other birds didn’t rip off the scab and start this whole mess over again.

She was Blind Chickens roommate for about a month and a half. I was happy that this happened during the cooler weather so flies weren’t an issue, keeping the wound dry also helps with fly strike (that would be the fancy term for maggots living in a wound).

There isn’t much to do after you get the healing process started other than give them lots of food, keep them clean and separated.

After a week she didn’t have any feathers coming in yet and she still had that giant scab but the small wound that didn’t go all the way through the skin was starting to close up a bit.

After 2.5 weeks you could see some new feathers coming in. Those plastic-y looking things are called ‘pin feathers’ and they’re the first step to this poor hen not being naked.

At this point they still have a blood supply, over time the “coating” will rub off and they’ll look like the rest of her feathers. If you’ve already been through a molt they should look pretty familiar.

She still had that giant black scab on top of her head and it was pretty secure. I wasn’t about to pull it off to check out what was happening underneath.

The scab came off on it’s own, it looked like there were new feathers growing in underneath it. That made me pretty confident in my choice not to pull it off, we didn’t need any accidental chicken waxing.

The feathers on her neck continued to grow out and there was only a little bit of wound left.

Side note: I left the scab because it was dry, there was no oozing and it wasn’t fly season. If I had to remove it I would have soaked it down with Vetericyn and used small scissors to trim it away where it wasn’t attached to the skin below.

This was the day she got to leave Blind Chicken behind and rejoin the flock!

She has a bit of a cowlick but considering what she went through it’s nothing. It’s another example of a time a chicken should have died but instead laughed and walked it off.

It’s been a few months now and she basically looks the same, with her head feathers just a little bit off. I can pick her out of the crowd but I don’t think anyone else would notice.

The point of this post was mostly just to show how crazy chickens are when it comes to surviving. All I really did was separate her from the flock and spray her down a few times with Vetericyn.

There was no vet, no stitches, no real coddling. If you have something like this happen now you know what to expect during the healing process.

Obviously there are no guarantees, she was a young and healthy bird and I’m sure that helped her out more than anything I did.

I am so happy I found this. We have a 6 week Barred Rock that is missing the top of her head, her skull is exposed. I did use the spray, her eyes can both open. I am keeping her warm, alone in a box with clean towels, in the dark. Do you think she can survive?

Unfortunately, it's hit or miss. If she makes it through the night and she's eating she has a good chance. Scrambled eggs, chick starter, and wet cat food are my go-to sick chicken foods.

Thank you SO much for taking the time to share this story and the timeline too. It's very helpful for setting up expectations around timing. Our blonde hen, Lady, was grabbed by a hawk six days ago. An ugly tear on her neck, a puncture wound under her tail and one in front of her right ear, but not *in* her ear or her eye--hooray! She is in isolation, eating and drinking and healing. Your story, and encouragement/reminder about chicken toughness, is a great boost in this day-at-a-time process. Also, this is brilliant: "Having chickens is a bit like having an old school freak show in your backyard."

Do you have any recommendations about reintegration? We did have her out in the yard for a moment, but found one hen was very quick to bully her, so are holding off until she is quite a bit stronger.

Do you have a small pen (wire dog crates work well) you can keep her in where she can be with the flock without them being able to get to her? I'm glad my story helped you, the hen in it is still going strong and it's nice to know that what she went through is still helping people!

What if you can't isolate the injured hen? (They're not my chickens.) The injured chicken looks very similar to the one pictured in your article. Will the bullying hens eventually leave her alone? Will she eventually start eating again?! I'm so worried about her but am not able to take any action. I'm just the 'crazy chicken lady' who visits and brings healthy snacks. I genuinely care about them and want the hurt chick to be ok. Thank you!

Thanks for this story. I recently had a hen (little over a year old) attack by the rest of the flock while they were out of their run and foraging the yard. She had some treading injuries and was wearing a saddle but not sure exactly what set it off. She had a huge chunk taken out of the back of her head before my husband rescued her. Didn’t think she’d make the night but here we are 9 days later and she’s healing well! I’m just amazing and it was so reassuring to read a similar story with a hen making a full recovery! I think mine is on her way too! Thank you so much!

Thanks so much for posting this and for the encouragement it provided. We had a fox attack today that left one of our girls with a terrible gash on her back - skin is torn, but it's not deep. I am hopeful she will recover. Thanks for taking the time to share this story, and so glad for your hen's recovery!!

Chickens are surprisingly sturdy. Keep it clean, keep the flies and the other chickens away and she should recover quickly. Good luck!