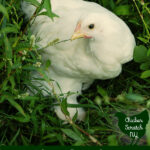 I love alliteration almost as much as I love my chickens, and it’s hard to beat Fluffy, Feather Footed chickens.

Other than looks feathered feet don’t offer any extra benefits. Even though it would be really cool if it gave the the ability to walk on water like the basilisk  lizard.

The Downside to Feather Footed Chickens

However are a few downsides, I’m personally not bothered by them but I thought I’d let you in on them before you fall in love with a feather footed breed.

The biggest issue is with mud. I free range my birds and living in the North East we get lots of it. There are actually very few months where there isn’t at least a little mud.

The problem with mud and chickens with feathers on their feet shows up in the nest box. All those lovely feathers carry mud from the ground, into the nest box and onto the eggs.

I don’t wash fresh eggs unless absolutely necessary, the really gross ones go into a carton for my dog and the rest get wiped off before use.

Obviously you don’t need feathered feet to track mud onto eggs but it’s definitely a much bigger issue with the feather legged chickens.

Assuming you can’t avoid the mud and you need to let your birds outside there are a few things you can do to keep the mess down.

1. Keep the coop floor covered in a thick layer of bedding, wood shavings, straw or dried leaves work well. It’ll help get the mud off their feet as they walk in to the coop.

It also helps if they need to take a longer walk from the door of the coop to the nest boxes, depending on the layout and size of your coop that may not be possible.

2. Keep them in the coop longer, most chickens lay early in the day and if they lay their eggs before they get a change to get muddy your eggs will stay cleaner.

I have to open up my coop before I leave for work so this doesn’t work for me but other people have had luck with it.

I’ve had a few Brahmas with what I can only describe as ingrown feathers. It’s only happened to roosters and only a few birds over the years.

In the picture above you can see the red and irritated patches on the outsides of the feet where the feathers should be.

This guy was my favorite rooster, his name was Bruce. I soaked his feet in warm Epsom salt water and rubbed away the casings that grew over the feathers.

The feathers were small and curled into balls, most of them fell out when I rubbed off the covering but a few I pulled out. I was afraid they would end up bleeding and cause more issues if I left them in.

He had a lot of foot problems in his old age, I think it was gout which causes swelling in the feet. Gout can be caused by too much calcium and a large breed rooster eating layer is a good way to get too much calcium.

When it comes to feather footed chickens you have quite a few options. Today I’m going to share three of my favorite chicken breeds.

They’re all birds that I have in my current flock and the cover the whole size spectrum so there is something for everyone!

It’s worth noting that the majority of my random barnyard chicken photos feature these three breeds, even though I have more than a dozen types of chickens at this point.

All three of these breeds are homebodies, they enjoy ranging but tend to stick close to home (unlike the ducks that spend more time with my neighbors than with me) and don’t take off when the camera comes out.

Brahmas are everything I look for in a chicken; giant, fluffy, calm, hardy and friendly.

They’re some of the biggest chickens you’ll come across, full grown roosters weigh in at 12 pounds and hens at 9.5 pounds. Once you add a mountain of fluffy feathers to that you’ve got quite a large bird on your hands.

Thanks to that large size they’re also useful as a meat bird. You’re looking at a longer turn around time than with a cornish cross but you’ll still end up with a decent sized bird on the table.

Brahmas are known for their docile personalities, going broody and laying 150+ medium-large brown eggs each year. They have a small pea comb making them a great option for raising chickens in a cold winter climate.

Even better they have a reputation for laying the majority of their eggs in the colder winter months when everyone else is resting after the fall molt. I have a variety of egg layers but I do notice a shift from a lot of blue eggs to a majority of brown eggs in the winter when the Easter Eggers take a break.

One thing to keep in mind when adding giant birds to your flock is the need for lower roosts. I have two sets of roosts, one is about 6.5 feet off the ground and the other is the DIY folding roosts I made with my daughter.

The chickens self-segregate with the lighter bodied birds like the EEs & my Appenzellar Spitzhaubens hanging out up top and the larger birds, Brahmas & Cochins, prefering the lower roosts.

They come in three color variations, the most common is the Light Brahma, which is what I have. It’s harder to track down and you’ll pay more but you can order Buff and Dark Brahmas from online hatcheries.

You can also find bantam Buff Brahmas. I’ve never raised them, my love for Brahmas is directly linked to their size and I try to keep my bantam numbers low or I end up with dozens of tiny eggs that no one but my 3 year old wants haha.

I have three birds left from my original flock that I stared in 2010, a blind Blue Laced Red Wyandotte and two Brahma ladies. The Livestock Conservancy isn’t kidding when they call these birds hardy!

The next magically fluffy bird on our list is the Cochin. They’re actually pretty similar to the Brahmas; they also come in both standard and bantam sizes and they’re in the Asiatic class (originated in Asia).

They also lay medium-large brown eggs and can be used as a dual purpose breed for both eggs and meat. Cochins are known for a docile temperament and going broody.

They’re large birds but not quite as weighty as the Brahmas. The roosters and hens are about pound lighter at 11 and 8.5 pounds.

Even with all that in common it’s quite easy to tell them apart at a glance. Brahmas have feathered feet, it gives them a bell bottom silhouette.

Cochins have fully feathered legs and that makes them look like a ball. A round, fluffy chicken ball.

They come in a dizzying variety of colors, over 15 recognized color patterns in both the standard and bantam sizes. Right now I have 2 splash Cochin hens, a splash rooster and 2 gold laced Cochin hens that I call my Halloween chickens.

Cochins have a single comb, making them less than my personal ideal for the New York winters. You don’t get the frostbite issues with smaller comb birds.

Last but not least we have the Silkies, another Asiatic class chicken, these guys are the teddy bears of the chicken world.

They have several unique features that make them stand out against any other chicken, as a result Silkies are the easiest chicks to identify in a crowd.

The special feathers make it a bit trickier to sex Silkies, the standard clues that differentiate hens and roosters are harder to see. The best clue is the extra ‘streamers’ coming from the head pouf on a rooster and a larger size.

They’re not the best layers, they are more ornamental than practical. They fit nicely in my mixed flock and they’re tiny enough that that don’t much.

And my kids love them, they’re just so cute it’s impossible not to love them.

Even though they have literal free range of the place the Silkies stay closest to home, I rarely even see them in front of the house. If you can’t (or decide not to) free range your birds you’ll want to be more careful about mixing tiny birds in with the giants.

One big problem with Silkies is a higher chance or wry-neck. Wry Neck is a condition where the chicks turn their heads to the side, some times it’s so bad that the chicks begin to walk backwards and can starve to death.

Silkies (and Polish) chicks are more susceptible due to a difference in their skull shape. The best way to prevent head injuries is to brood Silkies separately from other birds, especially larger ones.

Learn more about Wry Neck & How to Treat

Do you have feather footed chickens? Don’t forget to PIN this to you chicken board for later!