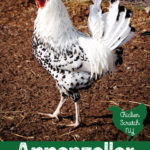 I love my Silver Spangled Appenzeller Spitzhauben chickens, they’re like an improved version of Polish chickens. And I really mean that in the nicest way. I had three gold laced polish hens and  it didn’t end well, they all met untimely deaths.

One was picked to death by her flock mates out of the blue when they were all about 4 months old. The other two were about as bright as a broken bulb. I have a feeling their stupid behavior was tied to the giant ball of feathers crowning their tiny heads.

They were adorable to watch as they bobbed along doing what chickens do. But on more than one occasion I found them wandering the hay field next door acting confused and lost and I had to herd them home.

Night time was also rough. The second the sun started to go down they would stop and sit down. ANYWHERE, in the middle of the field, in the food bowl, on a cow, didn’t matter.

After a few weeks of physically finding them and moving them back into the coop the night came when I wasn’t able to find them. Mostly black chickens can be pretty hard to find in the dark.

Sadly something with more skills than I have did find them and they were no more. That was the end our Polish hens, and as far as I was concerned the end of crested breeds on our farm.

Of course I was wrong. Enter the Appenzeller Spitzhauben. We received a handful of them in our surprise box. It was a fun addition, definitely not something I would have ever picked out for myself.

Over the last two years I’ve found myself won over by these guys. As of this moment we have 4 APs, three hens and Harvey the rooster.

I don’t normally name my chickens but Mr. Harvey Dent had a medical issue that meant lots of up close and personal time spent together and I began to feel bad about calling him ‘the one with the face thing’.

His issue was an abscess on his face caused by some type of external injury, after being drained/expelled and some blu-kote he’s mostly back to normal with a small lump of scar tissue.

They have very little comb, on the roosters it’s split into to horns and it’s barely visible on the hens at all. It makes them surprisingly good in the winter. 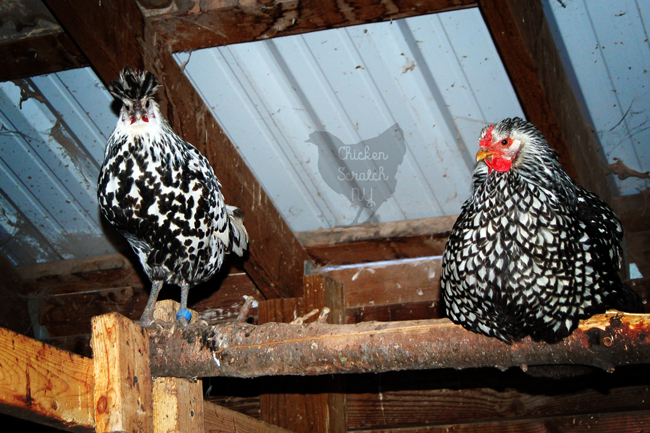 So why am I in love with this breed of chickens that’s more or less the opposite of what I look for? Let’s start with the superficial stuff, they’re really stunning birds.

We have a mix but most of my flock is have silver laced Wyandottes and light Brahmas, both lovely black and white birds, but these guys are just so pretty. The picture above is one of the AP hens with one of my original silver-laced wyandottes (I’ve had her longer than my house, shes almost 5 years old).

We have the Silver Spangled Appenzeller Spitzhauben, they have a controlled topknot of white and black feathers, pretty slate blue legs and a lovely color pattern that reminds me of dalmatians. When I say controlled topknot I mean a small little hat of feather no where near their eyes, these birds can actually see!

The name ‘spitzhauben’ means ‘pointed hood’ in Swiss and references a traditional hat worn by women in the Appenzeller region of Switzerland.

Aside from our banties they’re the smallest birds we have. They have a very slight build, similar to Polish chickens. I haven’t weighed any of our birds but the breed standard lists hens at only 3.5 pounds and roosters at 4.5. For comparison, my Brahamas hens are in the 9 pound range and the roosters about 12 pounds.

They are not bantams though, they are considered a standard breed. They’re tall but narrow, you can see how wide the chest is on the wyandotte (a pretty average sized breed, similar to a buff orpington) compared to the spitzhauben.

They lay smallish white eggs, bigger than a bantams but not quite the size of our orpington/brahma/wyandotte egg. 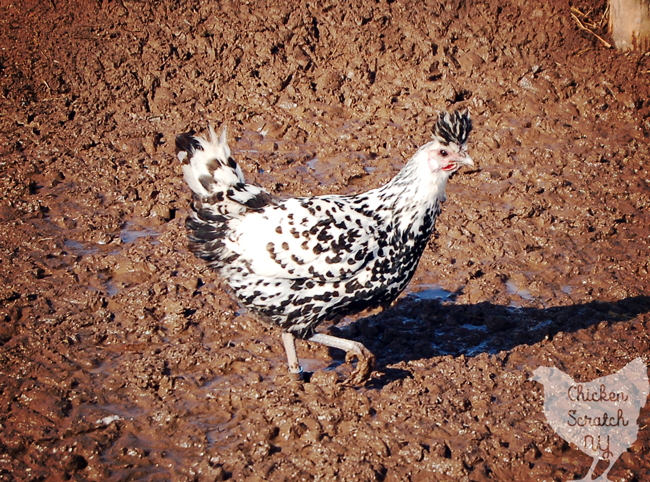 They are very active birds, constantly moving and all over the place. I’ve seen them way up in the mulberry trees, on the grapevines and from one side of the property to the other in minutes. If you need to keep your birds in a run I’d take a pass on these guys, they really like their space.

As far as predators go they seem to do really well. I think their coloring has something to do with it. Even though they have a lot of white on them it’s pretty broken up by random black spots.

They have that digital camo thing going for them where it’s hard to make out the edges and can’t quite tell where they begin and end.

They are also quick birds. They’re like little cartoon roadrunners in dalmatian costumes,where ever they’re going they plan on getting there ASAP.

They zip around the back field like crazy Christmas Eve shoppers looking for the last Tickle Me Elmo. One complaint I’ve seen is that APs wanting to roost in trees instead of in the coop. Luckily we haven’t had any issues, possibly because we have tall roosts in a large space. 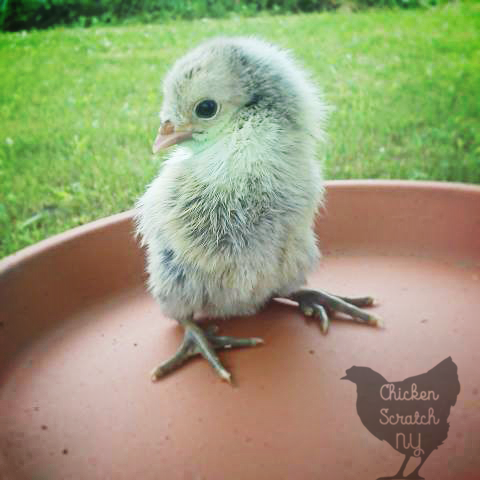 Obviously no post would be complete without a baby picture. This is probably Harvey, it has his sass! You can really see the slate blue leg coloring when they aren’t covered in mud. The chicks are a silvery grey with the tiniest hint of a puff on their heads, hinting at things to come. 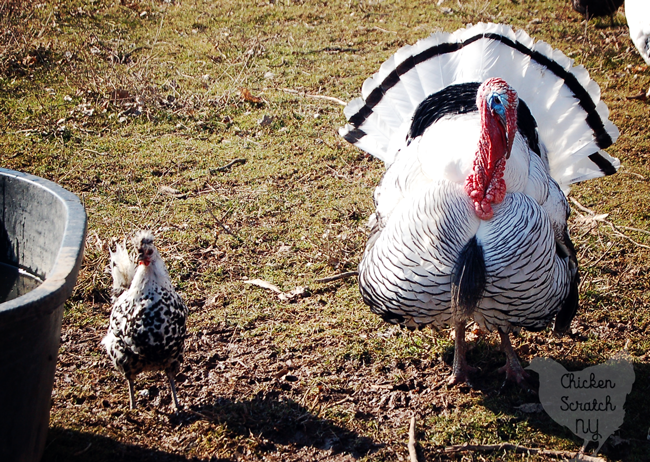 I hope I’ve opened your eyes to a new breed that you might not have considered. I think they’re cool little birds that fit quite well in a free range mixed flock.

In 2017 I had a hen disappear for a few weeks. I had given up on her coming back when she showed up with 8 chicks.

Still #broody, I’m pretty happy she has stayed in the same nest this time. We woke up to more snow so I’m not sure when I’ll be able to move her into the run. #chickensofinstagram #backyardchickenproject #backyardbarnyard #broodyhen #appenzellerspitzhauben #backyardchickens

She was a good brooder but an awful mother. She’s at it again (in the barn this time) and I’ll be taking her babies and probably giving them to my Blue Laced Red Wyandotte who wins mother of the year every time.

Of course Gobbles had to get involved as soon as I showed up with a camera, here you can see the size difference between a hen and my full grown royal palm tom. If you’re looking for more info I recommend Storey’s Guide to Raising Chickens

. You can also check out my Backyard Barnyard page for more of my fowl ramblings.

I love, love, love this breed. They have the best personality and they are so friendly. The first two we had were Elvis and Priscilla. Elvis was a mean rooster and had to leave the building. Priscilla was everyone's favorite. She was sweet and funny. She would come to our sliding glass door and jump up and peck it until we would come open the door. Sadly, she was bitten by a rattlesnake and died. The whole house was in mourning. There was weeping and gnashing of teeth. I was excited to see that Meyer hatchery sells these sexed so you do not have to buy them straight run. We have several pullets coming in next month. My kids are very excited.

I came across these birds at our local tractor supply store. It was the end of the season for baby chicks and I ended up bringing home all of them which was a total of 8 that were left for only $1.00 apiece 😁 they are adorable, mine should be laying soon! Totally different then what I'm used to having but fun to add to our group of 22. In chicken pecking order they are the lowest in the group which consists of buff's, austrolorps, barred rocks, and bantam's.

I got two girls in my Cackle Hatchery Surprise:)

How cute, I always wanted a vegetable garden with chickens running round it! Maybe one day.

What beautiful birds! As soon as we move to a house with a bigger yard, I plan on getting some chickens!