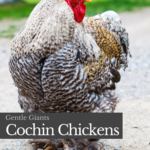 Cochin chickens are the gentle giants of the barnyard. The fluffy birds are known for their calm personalities and being easy keepers in a backyard flock.

If you’re looking to step away from the standard Rhode Island Reds and Silver Laced Wyandottes, Cochins are well worth looking into. They aren’t so rare that they’re hard to find or prohibitively expensive but they certainly look different than your standard chickens!

At the moment I have several cochin hens and one large, well-loved cochin rooster in my flock. My kids have named the roo Super Fluffy and he’s learned that if he hangs out on the back deck he’ll get first dibs on snacks.

Cochins are known for their large appearance and very fluffy feathers. They are a “soft feathered” breed, meaning their feathers are held loosely and that’s what gives them that puffy appearance.

I’m a fan of huge chickens but I know that they can be intimidating especially to people who haven’t had a lot of experience with chickens or livestock. It might make you more comfortable to know that Cochins aren’t really that big, they’re just a lot of feathers!

Full-grown Cochin roosters are about 11 pounds, sticking them right between the popular Buff Orpington and Brahma on the size scale. The adult hens weigh in around 8.5 pounds, again making them a hearty bird but nothing crazy.

From personal experience I can say that larger birds, in general, have calmer personalities, they’re more tolerant of people in their space and they tend to stick closer to home.

Cochins have fully feathered legs and feet, they basically look like they’re wearing wide-legged pants. I love a feather-footed chicken but if you live in a really wet area with lots of mud keep in mind that they’ll track that mud right into your nest boxes and all over your pretty eggs!

They have yellow skin and like all brown egg layers, red ear lobes. The roosters have large single combs with 5 points and the hens have a small single comb.

Most of my heavier birds, my Cochin hens included, prefer the low roosts, only a few feet of the ground. But Super Fluffy likes to get as high as he can. If possible give your Cochins a few options and see what they prefer.

If you’re in the market for a living ball of feathers but you’re wary of the large size or you just want some smaller pet chickens, you’re still in luck.

Along with the standard (large) cochin chickens you can find bantam Cochins. They’re much, much smaller, the roosters weigh less than 2 pounds and the hens barely break 1.5 pounds.

They’re largely ornamental but they do lay eggs. Tiny eggs.

Going back to that personal experience, the only mean cochin I’ve ever met was a black bantam cochin rooster. He couldn’t hit any higher than the back of the knee and at 1.75 pounds you might not even notice him through jeans and winter boots.

He was lucky to not be my rooster, I have a zero-tolerance policy for aggressive birds and he wouldn’t have been around for very long.

Cochins are one of the most variable chicken breeds. I can’t think of another type of chicken with more color options.

In theory, the birds are all that same, just wearing different coats, but in practice, that’s not always true. Rarer colors are often bred purely for ornamental reasons and you’ll find they lay even less than standard Cochins.

There are 9 varieties of the standard-sized cochin recognized by the American Poultry Association today. Unless you plan to show our birds that probably won’t matter to you but I’m going to break it up anyway.

My main man Super Fluffy is a Splash Cochin, a color variety recognized in the bantam size but not in the standard size. Lavender is another unrecognized variety.

That doesn’t mean they won’t eventually be recognized. It’s constantly being updated as breeders work to standardize their variations.

If you thought there were a lot of standard Cochin options hold on to your hat because there are 17 options for the little guys.

Cochins are an Asiatic breed with roots in China. They were developed from feather-legged birds brought to Europe and America in the 1840s & 50s.

The original Cochins were called “Chinese Shanghai Fowl” and later “Cochin China” before being shortened to Cochin, the way we know them today. The original birds were a soft buff color.

They were incredibly popular in the late 1800s and four varieties (black, buff, partridge & white) were included in the original Standard of Perfection, written in 1874.

Cochins were really popular in small backyard flocks but most of the attention came from their looks and not their value as layers or meat birds. As a result, they’ve never had any sort of commercial success.

Personally, that’s fine with me, as a mom and a chicken keeper I’m always a fan of friendly chickens and I’m happy letting these fluffy birds be lawn ornaments.

Cochin hens are basically feathered beachballs. They tend to hold themselves with their heads close to the body and that along with the very fluffy legs and feet gives them a round appearance.

The hens are gentle, docile, and sociable. They’re recommended for mixed flocks and will do well with other low-key birds.

The hens aren’t great layers, they lay from 110-160 eggs a year, but they are known for laying in the winter when a lot of the slighter egg layers have taken a break. When they do lay you can expect to find medium-large brown eggs in the nest boxes.

Cochin hens are known for going broody or sitting on eggs. However, out of all my Cochin ladies, only one is allowed to sit.

I have two nearly identical splash cochin hens and one is a great mom while the other enjoys sitting on eggs until they hatch and then kills the chicks. It’s pretty brutal but it’s also not uncommon when you let your hens sit.

I’m a big fan of nice roosters, I think they do a lot of good in a flock. My favorites have always fallen into the gentle giant category including Super Fluffy and the late Bruce, a giant Brahma boy.

Unlike most roosters, they have very soft curves and lack obvious sickle feathers or the long tail feathers that scream rooster. Because of that and the similarity in shape between the roosters and hens your best bet in telling them apart is by looking at the combs.

Cochin roosters have the same docile personality you see in the hens, and while that’s great for the humans in your life it can be rough on the roosters.

If you have any larger, more aggressive roosters they will push the Cochin out, sometimes violently. I actually got two Cochin roosters when I got Super Fluffy and I ended up giving one to my uncle because he was getting pushed around so much by the other roosters.

Do you Need a Rooster in Your Flock? Find out