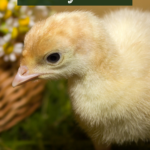 Baby turkeys are called poults and they are raised almost identically to chicks with a few important differences.

There’s a lot of chatter out there that turkeys are dumb and slow. I haven’t found that to be the case with my heritage breed turkeys but it might be more of a reality with the broad breasted birds.

Cackle Hatchery recommends raising poults with a few chicks, the idea being chicks are more aware and they can show the turkeys where to find food and water.

A turkey brooder can be set up just like a chicken brooder, you’ll need a draft-free space with heat lamps or a plate brooder, a waterer, and food. Keep in mind that the poults will grow faster and larger than chicks and you’ll need more room for them.

I use large black livestock tanks for my brooder with custom hardware cloth tops that I made after I had rats get into a brooder and massacre ducklings.

Brooders need to be large enough to give you a heat gradient so the poults can move in and out of the hot zone to regulate their body temperature.

I use flake wood shavings in my brooder (white bag at TSC), they’re the same ones I use in the coop for the chickens and for the alpacas. I like them because they stay fluffy and are easy to clean up, when I clean the brooders all the dirty bedding goes straight into a compost pile in my garden.

When I’m setting up my brooders I add a thick layer of shavings and top it with paper towels under the feeder and waterer. I only keep the paper towels in there for a few days to give the poults a chance to figure out the whole food thing. I’ll even scatter some of the starter on the paper towels for the first day.

You should never use newspaper or anything slick for bedding. Poults aren’t particularly strong and on newspaper, their legs will slide apart and they’ll develop what’s called ‘splay leg‘.

Splay leg can also be genetic or a result of improper hatching temps and can be treated but it’s much better to avoid it. I found 4 pipped eggs in an abandoned goose nest and brought them into finish hatching in the incubator.

4 out of 5 made it and 2 of those had splay leg. A few days with their legs vet wrapped together and they were good as new.

Turkey poults need supplemental heating for the first 6 weeks, I use a heat lamp with a guard over the bulb. I have my light bulbs on chains screwed into wooden beams in the ceiling.

Temps should be at 95 degrees for the first week and gradually lowered 5 degrees a week until you get to 65 degrees. You lower the temp by raising the light up.

Some people say you should give turkey poults more heat, starting out at 100 degrees instead of 95. I’ll be honest, I rarely use a thermometer after getting everything set up in the beginning.

Instead I watch the babies like those hawks that keep killing my chickens (obviously with better intentions) and adjust the light until they are behaving correctly.

If your birds are clumping together right under the light and peeping their tiny heads off, they’re too cold. You need to lower the light or add another one if you can’t get the light any lower without causing a fire hazzard.

On the flip side if your poults are scattered to the edge of the tub they are too hot and you need to move the lights up. Happy babies should me moving around, eating, drinking and not screaming.

Poults should be fully feathers by 6-8 weeks. Once they have their feathers you can safely remove the heat and start moving them out to the barn or coop.

I time my baby poultry orders so they’ll be ready to go out to the barn in early June. That way I don’t end up with a bunch of birds rapidly outgrowing the brooder in my house thanks to a Mother’s Day snowstorm.

Turkey poults need more protein than chickens, I feed mine Gamebird Starter with 30% protein instead of chick starter that has 20% protein.

Chicks can safely eat game bird starter but you should never give it to ducklings! If you give ducks too much protein it can lead to wing, leg, liver, and kidney problems.

I’ll mix turkeys and chicks in my brooders but I always keep waterfowl separate. Ducklings and geese grow exponentially faster than chicks, poults, and especially keets (baby guinea fowl) and they are gross. Everything is always wet.

For the first few days I like to put paper towels down over the wood shavings and feed the gamebird starter in the bottom half of a paper egg carton.

Paper egg cartons work really well because you can toss them when they get gross. DO NOT use the Styrofoam ones, they will peck them apart!

After a few days I stop replacing the paper towels, at that point the poults have figured out where the food is.

Turkey poults should always have access to fresh water. The standard two piece gravity waterers are great for being used in the brooder.

Never give small birds cold water, they don’t have a lot of mass and cold water will chill them.

If I notice the poults are making a huge mess of their water I’ll place the waterer in an old glass pie plate. It’s not 100% successful but it does help keep the bedding out of the waterer.

It's not really right or wrong, I don't bother but some people swear by it. If you do add it to the water stick with plastic, glass or rubber waterers