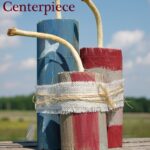 When I was looking for a 4th of July centerpiece my mind went back to some  firecracker blocks I saw in an issue of  Country Sampler last summer.

I used things I had around the house, this is a great scrap project, use what ever you have!

I cut 3 chunks off a fence post that came with the house. I eyeballed three separate lengths and marked them with a pen.

The length isn’t that important, just aim for 3 distinct lengths. Or make them all the same, it’s going in your house you should do what you like.

After you cut them give them a quick once over with a sanding block. I still wouldn’t lick them, but there are no giant slivers hanging off. The fence post I used had spent some time outside and was a bit rough in areas. 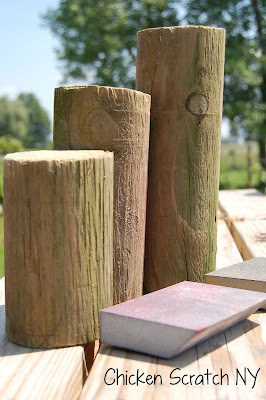 Grab the drill and a bit at least a little bigger than the rope you’re using for the fuses. I went way too big, it’s fine in the end but I ended up using a lot of hot glue to keep things together. 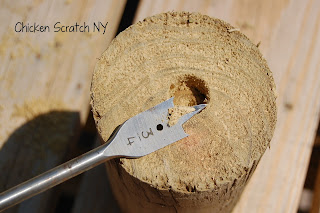 I grabbed the bit without the rope and the holes were too big, I should have gone with the 1/2 inch not the 3/4. In my mind the rope was a lot bigger. 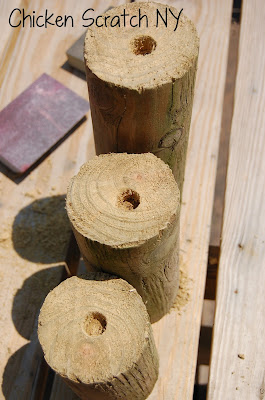 Add a hole to each block, I eye balled center and I was only slightly really off on all three. I love ‘primitive’ style because nothing has to be perfect.

Keeping with the rustic theme my blocks don’t stand perfectly flat but it’s all good.

I painted mine using left over paint, the blue and red from the barn quilt and the white is basic Apple Barrel acrylic. I watered down the paint as I went, painting the tops and all around the sides.

The large piece got a coat of blue and the two smaller pieces each got white. After it dried I free-handed white stars on the blue (including one one the top) and red stripes on the white ones. Some light sanding and it was done.

I used some old rope for my ‘fuses’. It was polyester-ish and DID NOT want to be painted. Two coats of white paint, 2 coats of pray primer and a final finger painting adventure later I managed to cover the gray/yellow checker.

Remember when I said the holes were too big? This is the gap that was left after I hot glued the ropes in.

I used a candle to fill in the holes with wax but you could just use a ton of hot glue and then paint it to get rid of the shine.

A burlap band and a few loops of twine finish it off!

Check out my 4th of July page for more ideas or start here:

How cute is this! I love that I can save and reuse for next year, too! I'm throwing a Fourth of July BBQ and this will be absolutely perfect.

Cool idea! on my list of 4th decor for next year!JoAnn