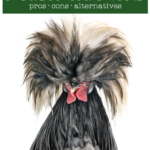 Polish chickens have a unique look that demands attention. They aren’t the best layers but they’re gentle birds that could make a nice addition to your flock.

Polish chickens are easy to pick out in a crowd, both the hens and roosters have a large puff of feathers on the top of their heads. I’ve had them in the past but they aren’t really cut out for life in my flock and I don’t plan on getting any more.

Over time Polish chickens have been treated as an ornamental breed and bred for their striking appearance over utility.

They have a slight frame, with thin, narrow bodies and tightly held feathers. They are the exact opposite of my favorite thick, fluffy birds.

Hens weigh in around 4.5 pounds and roosters aren’t much bigger at 6 pounds. For comparison, a Wyandotte hen, which is a pretty standard backyard chicken, weighs 6.5 pounds.

Polish chickens tend to have calm personalities, probably because they can’t see but we’ll get to that later. They are also known for being friendly.

Polish chickens have slate or pale blue-grey legs with no feathering, white earlobes and a split comb that you might never see thanks to the large crest.

Polish hens are moderate layers, they lay between 150-200 medium white eggs per year. Over time they’ve been bred more for their looks than egg production and there is a lot of variation in how much individual birds will lay.

Polish hens aren’t known for going broody, that’s not to say they won’t, just that it’s not something you should count on. I have an Appenzeller Spitzhauben who sits every year and a Silkie that can’t be bothered, both are completely contrary to the bred norm.

It’s fairly common for birds bred for eggs or ornamental/show purposes to have the broodiness bred out of them. Either intentionally or accidentally.

One unique characteristic of polish chickens is the dimorphic nature of the head crest. Polish hens have a dense, rounded ball of feathers on top of their heads while the roosters have a looser, wilder-looking crest that lacks the round edges.

Polish chickens come in several color variations. Not all are currently recognized by the American Poultry Association but unless you plan to show your birds that really doesn’t matter.

The most iconic is the white-crested black, the solid black birds have a white ball of feathers on top of their heads. There is also a blue variation, where the body of the bird is all slate blue with a white crest and solid white and blue variations.

When I say blue, I don’t mean Blue’s Clues blue, “blue” chickens are a very pretty slate grey color with quirky genetics. The blue coloring is a heterozygous trait and can not be bred true in a line.

Breeding two blue chickens will result in approximately 1/4 black, 1/4 splash, and 1/2 blue chicks. If you want 100% blue chicks you need to start with one black and one splash parent.

The other types of Polish coloring are ‘laced’ which means the feathers are a solid color with a narrow band or edging of a contrasting color. It’s a common color pattern also found in Wyandottes and Cochins.

The other physical characteristic used to break up the Polish breed is the beard.

Polish roosters are easy to tell from the hens, they have a much more open crest; think less pompom, more firework in shape. They really are stunning birds, with chickens it’s always the guys that make you stop and take a second look!

Polish roosters aren’t known to be aggressive but you can never say 100% if you’ll have a nice bird. My uncle had a gold-laced Polish rooster that lost his leg in an unfortunate accident and survived.

He spent a few years being Peg Leg Pete the Polish Pirate and managed to get around and free range with his hens. I think his low body weight made it easier on him, I can’t imagine a giant Brahma doing well on 1.5 legs.

They really are pretty birds and if you’re looking for a smaller rooster for your flock that won’t put as much wear and tear on the hens as a big guy maybe a Polish gentleman is right for you.

The same poof of feathers that make Polish chickens so exciting can also be their downfall for two reasons.

Chickens with a large topknot of feathers, including Polish and the super popular silkies, have a “vaulted skull”. This is actually a defect in the skull.

Vaulted skulls are more delicate than normal skulls. This skull deformation leaves a hole or very thin piece of bone over the brain leaving it largely unprotected.

Skull issues are most noticeable in chicks, if you’re going to be raising a mixed group of chicks keep any vaulted chicks on their own and make sure they have extra room.

Chicks (and chickens in general) get pecky when they’re crowded and crested breeds really should avoid any head pecks.

According to the Poultry DVM chicks with vaulted skulls can grow out of the problem, as they age the hole can close up and do a better job protecting their brains.

The other issue I’ve had with my own Polish chickens is their eyesight. Those giant puffballs of feathers really limit their vision.

Many years ago I had two Polish hens and they were always winding up in the oddest places. One would be alone in the middle of the neighbor’s hay field, the other would be in the garage. I think they just walked around Roomba-style, in a straight line, and then turned when they hit something.

The Polish hens could not get themselves in the barn at night. Wherever they were when the sun started to go down, that’s where they were sleeping.

Every night I was out there looking for Blanche and Rose (at the time I had cows named Dorothy & Sophia) so I could pick them up and move them into the barn. Eventually, a night came where I couldn’t find them but something else did.

And the Polish hens were no more.

I don’t actually think Polish chickens are bad birds, I just don’t think they’re right for me. I have a large free-range flock and they have a lot of ground to cover and a lot of places to get lost.

If you have a smaller area, you keep your birds in a run or you are looking more for pets than livestock Polish chickens might be just what you’re looking for!

Read more about Picking the Right Chicken Breed For Your Flock

If you’re looking for a crested chicken with a bit more in the street smarts/common sense department you should check out Appenzellar Spitzhaubens.

They have a similar body type and a crest of feathers, however their topknots are much smaller and these birds can actually see.

Appenzeller Spitzhauben are very active birds, they’re always running around and I’d vote them most likely to eat all the mulberries at the top of the tree.