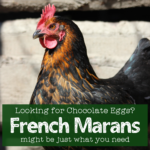 If you’re looking for dark chocolate brown eggs that are almost to pretty to be real Black Copper Marans are your birds. They’re a midsized, dual purpose chicken that fit in perfectly in a backyard flock.

Marans are an old breed, they come from France where they were developed from feral chickens left behind by seafarers in the 1800’s. The goal was to produce a dual-purpose bird that laid deep brown eggs and I’d say they hit that nail on the head.

Black Copper Marans didn’t become popular in America until the ’90s. Even now they’re not always easy to get you hands-on, they tend to sell out quickly and be more expensive than the more common breeds.

The breed wasn’t even recognized in the American Standard of Perfection until 2011, my copy is from 2010 and they’re nowhere to be seen!

Marans chickens are what I like to call, chunky mamas. They have fluffy bodies similar in shape to Welsummers with wider chests and stocky bodies and a medium single comb.

They’re a mid-sized bird with orange eyes and white skin. Adult hens weigh in at 6.5 pounds and roosts are 7 pounds, about the size of Wyandottes and a bit smaller than Rocks. Quick-growing Marans are considered dual-purpose and can be used for eggs and meat.

There are different strains or lines and there is some variability in both the number of eggs and the deepness in the color. ‘Production Strains’ have been bred to lay more eggs, and because the color of the eggs lightens up as the season progresses they’ll end the year laying much lighter eggs.

In general Marans are on the low end of average laying around 180-200 large eggs per year. In my experience the egg shells much thicker and harder than other eggs, it makes them a bit miserable to peel when hard boiled and I’m honestly shocked the chicks ever manage to get out!

Marans chickens have pretty calm personalities, they’re very inquisitive and not at all aggressive. I’ve never had a Marans rooster but I can speak for my hens and say they’d be a great addition to a backyard flock.

Marans hens are also good mamas, they haven’t all gone broody but the ones that have, have done a great job hatching and raising chicks.

As pretty as the chickens are the real reason everyone wants to raise Black Copper Marans is the eggs. Marans eggs are deep brown ranging from chocolate to almost black.

Brown eggs are actually white eggs with an ‘over spray’ of pigment that gives them their color. If you crack open a brown egg and look inside you’ll see a white shell.

Variation in the amount of pigment the hens add to the eggs can result in a variety of brown shades with the darkest eggs coming at the beginning of the laying season in the spring. It can vary over the life of a hen and some eggs even show dark speckles or an ombre of color due to uneven pigment application.

I ordered the French Marans Female Surplus from Cackle Hatchery, both to save a little money on sexed chicks and because I like having a mix. If you’re looking to build up a flock always check the bargain mixes, larger hatcheries will have all sorts of them available with options like all Polish, all feathered feet, all blue egg layers, etc but with a mix of color variations.

Black Copper and Cuckoo Marans are the easiest to find in the USA but they aren’t the only ones available. All Marans lay dark brown eggs but the BC and Coukoo are most likely to give you the darkest eggs due to specific breeding.

Cuckoo Marans are probably tied for popularity with the BCM. They have a black, white and grey barred pattern on their feathers similar to barred rocks and Dominiques.

If you give their feathers a close look you’ll notice that the cuckoo pattern is different from the barred pattern. The lines are more irregular giving the birds a blurry look.

I’ve heard from several sources over the years that barred and cuckoo patterns are great for free-ranging birds. The irregular pattern acts like camouflage in tall grasses or weeds.

Black Marans have the same iridescent black color you see on the Black Copper Marans, just without the copper coloring on the chest and head.

If you’re looking for dark brown eggs but you’re not feeling the dark feathering check out French Wheaten Marans. I got a few of these in my Surplus and I quickly fell in love with them.

They have a lovely buff feather color with darker feathers around the head and tail. Last year I kept finding random chicks and it was driving me crazy until I realized a French Wheaten Maran made a nest in the rafters and the babies were hatching.

I had to climb up a ladder (precariously placed over a goose nest complete with an angry hissing mama goose) and pull the rest out. She was a great mom and raised all the babies she sat on.

Oh, and she did it again in the fall. Fortunately by that point the goose was done laying and I didn’t have to deal that winged terror again.

If you’re looking for some gross pictures, I had French Wheaten Maran that almost lost her head but recovered completely. I wrote all about her wound healing process.

Most of the Marans you’ll see for sale are French but there is a small subset of the breed that was further refined in England. English Marans look really similar to French Marans with the exception of the clean eggs.

French Marans don’t have a lot of leg feathering to begin with, they’re basically bald compared to my Cochins & Brahmas but the English have none at all.

If the sparse look bothers you or you prefer clean-legged birds for mud reasons check out the English strain.