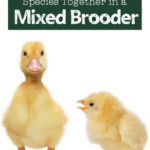 Spring is the time for babies on a farm and if you’re looking to expand your flock you might find yourself raising more than one species. With time and space at a premium, it might be tempting to put different kinds of birds in a brooder together but that’s not always a good idea.

When you’re bringing home baby birds (chicks, ducklings, goslings, keets, or poults) it’s critical that you have a safe space for them to grow. There are a lot of ways to set up a brooder but the important thing is to have a draft-warm space with fresh water and food.

I use large rubber stock tanks, they’re waterproof, they last forever and they work well for larger numbers of birds. 95% of the time I use red light bulbs for heat, the other 5% I use a plate brooder.

Mixing Species in a Brooder

There is nothing wrong with mixing up your barnyard fowl and branching out from chickens. I personally have turkeys, ducks, geese and guineas living with my chickens.

But things are different when they’re babies. Nutrition requirements, growth rates and generally messiness all play a roll in raising healthy birds.

We’ll start with chickens because most people do. Chickens are actually pretty flexible when it comes to brooding, one thing to keep in mind is you should set up a separate brooder space for your egg layers, dual-purpose or heritage (aka slow-growing) meat birds and any Cornish Cross.

Cornish Cross are the standard white meat birds that grow really quickly. They will literally eat themselves to death and you need to be able to limit their food intake, something that isn’t an issue with other chicken breeds.

The rest of the chickens can be raised with both keets (baby guineas) and poults (baby turkeys) if you pay attention to a few things.

Both keets and poults should be fed a Gamebird starter or a starter with higher protein. Chicks will do fine on the higher protein food, but it is usually more expensive and if I have enough poults or keets to raise them by themselves I will.

Keets and poults are on the opposite side of the size spectrum, keets are tiny and poults are gangly. If you’ll be mixing them, plan to keep the keets with bantams and the poults with regular-sized chickens.

Despite the size differences keets and poults do have something in common, They have the reputation of being about as smart as a box of rocks.

Without a parent around to guide them the next best thing is to raise them with a chick or two. The chicks will help then figure out the whole eating and drinking thing that you’d think would be instinct.

I’ve never been a huge fan of the ‘turkeys are dumb’ trope but this year I got a batch of poults and when I decided to put them under a broody hen (I tried a turkey & a champion mama hen with a ton of babies under her belt) they would not stay.

They’d pop out at random and refuse to go back under. After two near death experiences (one was on it’s back twitching, really fun) I brought all six back in the house and set up a second brooder. That’s actually what inspired me to write this post.

On the surface brooding the land fowl and the waterfowl aren’t that different, they all need a safe, draft-free space with food and water. But you really don’t want to mix the two.

Ducklings are adorable for about a week, after that the mess and the stink take over and you’ll end up swearing to never raise them again. Geese and ducklings both grow incredibly quickly, much faster than the other birds and they’re not great roommates.

The same large tubs that I can keep a dozen chicks in for 8 weeks will hold 4 ducklings for maybe 6 weeks before it’s impossible to keep them clean.

Goslings are basically giant ducklings, they grow larger, faster, and make more of a mess. I’m very lucky that my adult geese are baby crazy and they’ll take over the goslings at any stage.

I usually take the baby geese as they hatch (under the mama geese) and bring them indoors for 2 weeks or so to make sure they get a good start with waterfowl or duck starter. Then I’ll start moving them out to a pen during the day and let the geese take over when it gets too scary.

I’m not kidding when I say the geese are baby crazy, they literally chase me down when I’m carrying the babies outdoors. And they raise them in a big family group, all the males and females together.

The other big difference between the water and the land birds are the nutritional needs. Ducks and geese need lower protein or they can end up with angelwing, a potentially reversible but better-avoided condition where the wing joint rotates and sticks out.

They also require niacin in their diet, without it they can fail to thrive or even die. In the past, I’ve added brewers yeast to chick starter but this year I bought duck food for my ducklings.

It’s a pellet instead of a crumble, which I actually like because I currently have 3 different types of starter and having one be a different shape makes it easier for the kids to help me feed without mixing things up.

The pellets aren’t very big but I’ve been giving them a quick chop in the blender to make them more manageable for the little guys. Ducklings grow so quickly that I’ll probably stop after about a week.

You can also start feeding them chopped up grass and greens, just remember they can’t chew so keep the pieces small. Geese are really big on the greenery and they can feed themselves off pasture by the time they’re 6 weeks old.

One way that the waterfowl are superior to the land guys is they can be moved outside much earlier. Depending on the weather I start taking my ducks out for the day when they’re about a month old.

As long as it’s not raining and in the 60s or above they spend all day in a pen outside with a big bowl of water and food, I move the pen every day so they can get fresh grass to eat and the lawn can recover.

The pen I use is made from wooden 2×2 and sturdy 1×1 metal mesh. You can see it in the picture above with the geese getting ready to jail break the kids.

An extra benefit to the pen method is the babies get used to being out in the yard with the rest of the flock without having to worry about any aggression because they’re safe in the pen.

If you have a really large brooding space you could mix gosling with ducklings but I really recommend keeping them separate and in your home for the shortest amount of time possible.

I have a broody hen raising 8 chicks that are now 2 weeks old. I would like to add 2 goslings and would like to know 1) if the broody hen would accept 2 more & 2) how old should the chicks be before adding the newborn goslings? Thanks, Jesse

I'm not sure a hen would take on goslings if she already had chicks (not all hens would take care of goslings either), even if she did the goslings are going to outgrow the chicks really quickly.