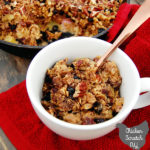 The first rhubarb recipe I’m going to share with you is the perfect spring breakfast. Today we’re making Rhubarb Baked Oatmeal with Blueberries and Pecans to kick off the fun part of Rhubarb Week! Not that growing rhubarb isn’t fun, but eating it is my personal favorite. It is the perfect hearty breakfast on a cool morning.

This is the first time I’ve ever made baked oatmeal and it couldn’t possibly be easier. I made mine in a small cast iron skillet, if you look closely you can see how the oatmeal shifted.

The racks in my oven are all wonky from the time I tried to clean all my cast iron at once. Turns out you shouldn’t put half a dozen skillets and a cast iron dutch oven in the oven all at once.

Moving on, it’s important to put all this into a warmed cast iron pan. Putting food in a cold pan is a great way to get everything to stick. 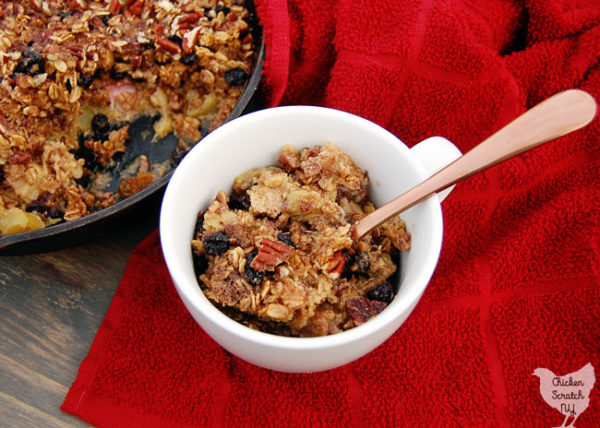 Stir together the oats, brown sugar, 1/2 of the nuts, dried blue berries, baking powder, salt, cinnamon and ginger in a mixing bowl. I really like using a large glass measuring cup, the spout makes pouring much easier.

In another bowl whisk together the eggs, milk and vanilla. Add the liquid and the melted butter to the oats and stir it up well. It shouldn’t be soupy but it will be wet.

I tossed my pan into the oven while it was preheating. When I pulled it out I dropped in some butter, swirl it around after it melts and dump in the rhubarb. 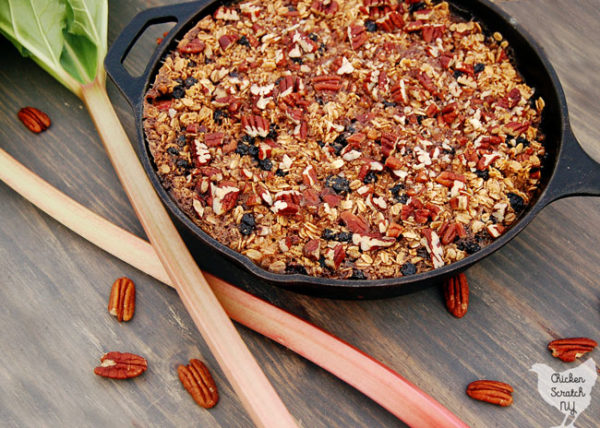 Rhubarb bakes up just like apples. Well, a slightly mushy, very tart apple. Blueberries are a great complement to the rhubarb, the natural sweetness works really well with the tart rhubarb.

The dried blueberries add more than just sweetness. They plump up as the oatmeal bakes, soaking up some of the liquid from the rhubarb and keeping things from getting soggy. You could use raisins if blueberries aren’t you thing.

I love the pecans in this, especially the ones on top. They get deliciously toasted while the oatmeal bakes. If you only have a 1/2 cup of pecans in the house, skip the ones in the oatmeal and just toss them on top. You could also leave them out if you’re not a nut person but the texture will be different.

This recipe can also pull double duty, not only is it a delicious hearty breakfast recipe but if you top it with some vanilla ice cream? Instant dessert. Especially warm from the oven.

Don’t forget to PIN this to your Breakfast or Recipe Board!

Check out my Recipe Page for more ideas or start here: 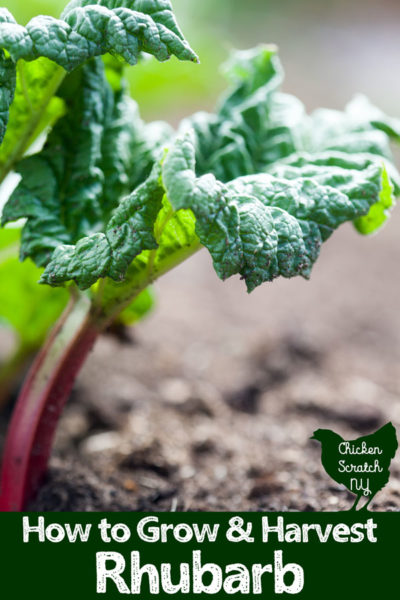 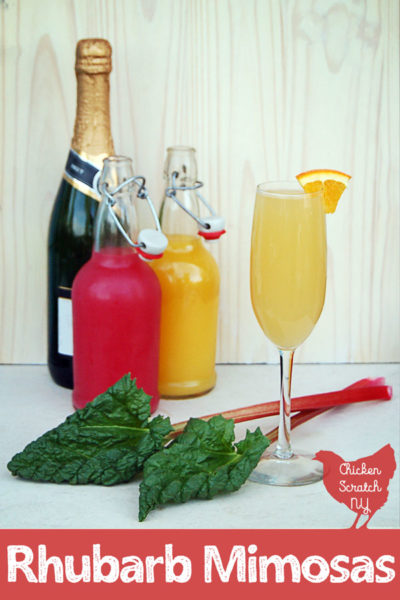