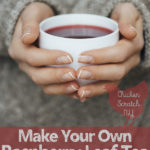 I’m a coffee girl no doubt. But occasionally the need for a nice glass of tea arises. Quite often the occasion is a crampy uterus set on world destruction. That’s when I turn to my stash of raspberry leaf tea. 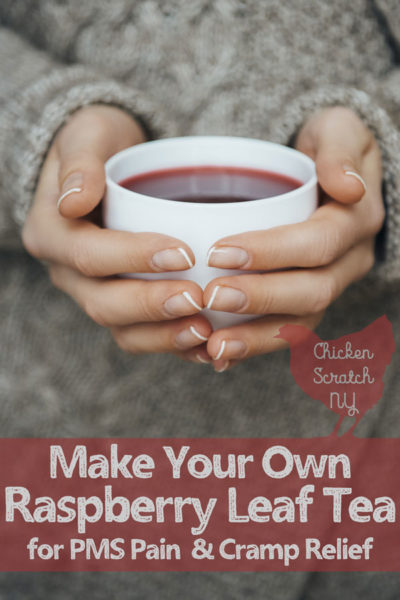 FYI this is going to get into TMI territory. And I’m not really sorry about that, if you’re lucky enough to skip out on painful monthly cramps you can skip this post. If you don’t want the background but you’re always up for some herbal remedies skip down a bit to the raspberry leaf tea recipe.

I AM NOT A DOCTOR! This is not intended as medical advise, it’s purely anecdotal based on personal experience. Talk to your health care provider if you have any questions. Now that that’s out of the way let’s get to the good part.

Ever since they started I have had terrible periods. Like vomiting, crippling pain, dizziness, migraines, misery. I started taking birth control pills fairly young and they did a lot to keep it in check. Then we decided to have a baby… I stopped taking the pill in October 2012.

Each period was worse than the last, February was the worst. Then March hit and I ended up really sick. I brushed it off thinking it was my hateful uterus out to get me. Instead I had 103+ fever, bronchitis and a baby.

The last part was awesome, the rest not so much. I’m still breastfeeding (after 8 months) but sadly I wasn’t one of those lucky women who hold off their periods through some hormonal miracle.

Even after giving it a baby my uterus is still angry with me about it’s empty status. Pre-baby I used to take enough painkillers to make my LPN husband really nervous just so I could function and you know, not throw up. So I needed a better method. I wanted a better method. 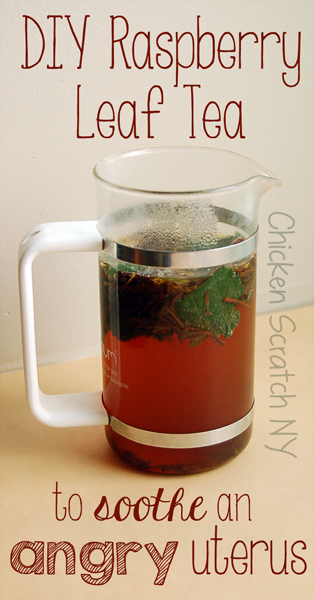 Somewhere along the way I read that red raspberry leaf tea could help increase milk supply. I was pretty sick of drinking that awful lactation tea (in it’s defense it does work, I just can’t stand the taste of licorice) so I figured I’d try it.

I don’t have any red raspberries, and all the teas seem pretty clear about the color of the berry, but I figured the gold and black raspberry bushes couldn’t be that different so out a plucking I went. I pulled off a few leaflets and took them to work where my awesome boss has a giant dehydrator and got to work.

The same article also mentioned the tea ‘tones the uterus’ which I’m guessing has something to do with it’s pain killing properties.

This also happened to be right at the beginning of my period (TMI ahead) when I wanted to eat everything and if  I couldn’t eat it I wanted to sleep on it. I noticed an appreciable drop in my milk supply so I figured it was a great time to try out the raspberry leaf tea. 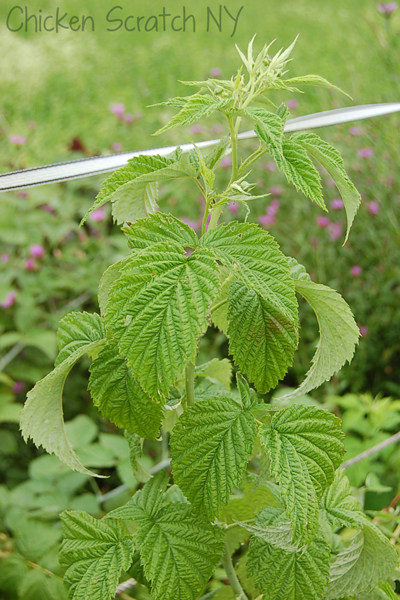 The first time I made it I didn’t have any dried leaves yet so I plunked about 6 or so fresh leaves in a mini french press with a few mint leaves, filled it with hot water and let it sit. And sit. And sit. I was waiting for some color change but I never got one.

After a sniff I could really smell the mint so I pressed the plunger and poured out the tea. I added a little spoonful of honey and ate some pound cake in preparation for the acetaminophen I was going to down in response to the cramps I could feel taking root in my lower back.

Then a funny thing happened. I drank the tea and the rumbling of pain beginning to form stopped. No more cramps. And it wasn’t bad tea either.

I could taste a little something green  behind the mint but nothing bad, certainly nothing as bad as the lactation tea.  I didn’t even realize it at first, sort of how you forget about breathing through your nose until you’re sick, I forgot I was supposed to be in pain. The next day I had a cup of tea first thing when I got to work and no cramps. It was magical.

The day after my period I thought I was off the hook so I didn’t bother adding raspberry leaves to my tea (at this point I was just putting them in the french press with the loose leaf black tea I was drinking, more on that at the bottom).

And then the cramps started again. By the time I finished what I was working on and went to make some tea I was having hot and cold flashes, nausea and cramping; 15 minutes after drinking a cup of tea I was fine. Great even. AMAZING!

I’ve started adding a few leaves to my tea every morning in an attempt to never ever plan a self-hysterectomy using pliers and a seam ripper. We will see how that goes in a month. 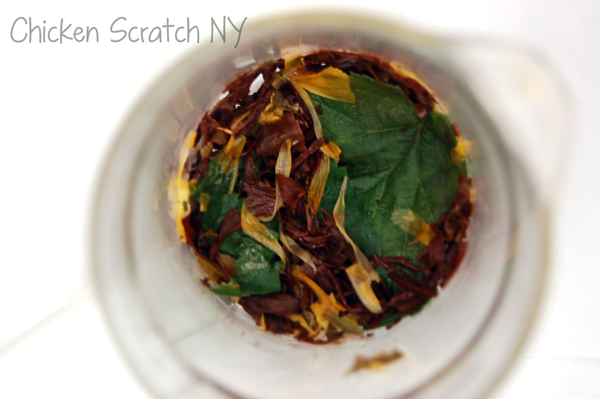 Of all the plants I have growing, red raspberries are not on the list yet. I have black raspberries and Fall Gold ever bearing raspberries. I didn’t get them pruned last year so the black ones are a tangled mess that I’ll butcher once the berries are gone. Until then I’ve been pulling leaves off the older canes.

Fresh leaves work great while you can get them but once the winter hits it’s going to be a problem. My plan is to cut back the ever bearing bushes this fall and turn them all into tea. I have a lot of main crop summer berries so I’m ok with skipping the first set of berries in favor of a bigger fall harvest.

Raspberries in general are vigorous growers that benefit from heavy pruning. You could drink tea all day long and you won’t hurt the bushes.

How to Make Raspberry Leaf Tea:

1.  Pick  fresh leaves, I go for the bright green ones near the tips. They are prickly so be careful, you might want to wear gloves and don’t try it at night like I did.

2. Wash them and dry in a salad spinner or roll up in a dish towel or paper towels. If you plan on using them fresh that’s it, if not read on

3. Dry on the herb setting in a dehydrator. Depending on the dehydrator and how many leaves you’re using it might take 8 hours or 2 days.

OR hang up in a warm dry place. Summers in the north east are pretty humid so it’s not a great method here, things tend to get moldy. OR dry on low in your oven, houses are hot enough in the summer so this would a last resort here.

4. Once the leaves are crisp store them in an air tight container. A mason jar with a plastic screw on lid works great. You don’t have to break them up, it’s easier to just grab two leaves than scoop out crumbles. 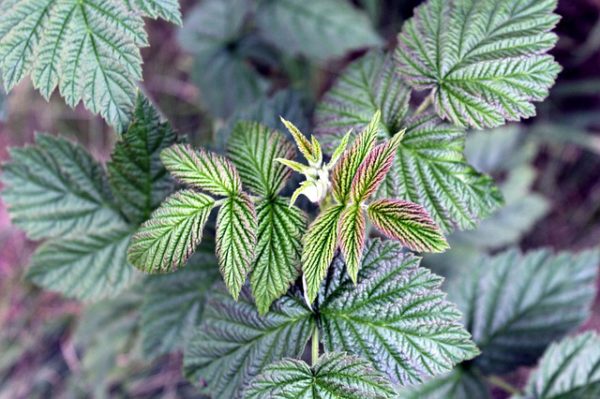 Brew (steep?) Tips: Herbal teas are usually brewed at higher temps and longer than tea-leaf teas so they are probably your best bet if you want to get the most out of your raspberry leaves. Like I said before I thought it was pretty good with a few mint leaves and some honey.

If you want to mix it with regular tea I’d go with a black tea, it can take a higher heat than green tea. I drink loose leaf black tea that I make in a mini french press. I add the tea, drop in a few leaves and add the water. Honestly it doesn’t taste any different than usual.

Toss some leaves in a small pot of water and heat until you see bubbles. Remove from the heat and drink when it’s cool enough to tolerate. Burning your mouth won’t make your cramps go away!

For more information on growing raspberries: 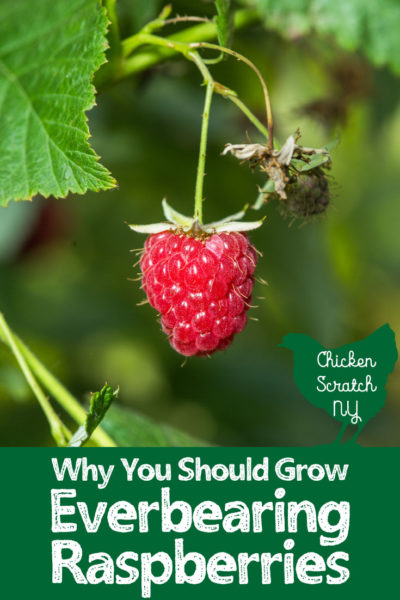 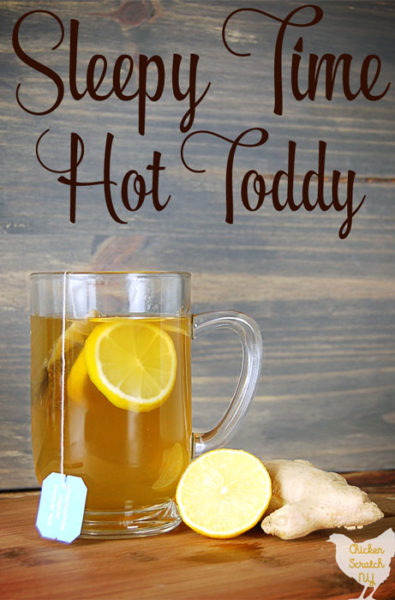 Hey Alecia, thanks a million for sharing! I wish a lot of monthly, long and hard-suffering woman would stumble upon your article and get relief and bless you for eternity! Please keep creating such lovely things!

I know the pain you're talking about, and I love raspberry leaf tea. I haven't had the miraculous pain relief you've had (that's really awesome how fast it worked for you!) but it does keep my cramps down to a minimum. Thanks for sharing!

I must try this... Do you think wild dew berries would work as well? I have horrible monthly symptoms and my daughter is very close to starting herself. I am new to the growing your own herbal world. Thank you so much for leading me to your post!

Jane @ Cottage at the Crossroads

Hello Allecia, I, too, suffered from horrible cramps all my life. I found that ibuprofen worked for me, but I would get in a panic if I ran out of pills. I found your post so interesting-wish I'd known about this a long time ago! I'm stumbling your post so others can find this useful information! ~Jane