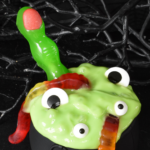 Move over Graveyard Dirt, there’s a new Halloween pudding in spooky town! Start with store-bought tapioca pudding and turn it into a wicked witches bubbly brew!

On a normal day, I’d say tapioca was a risky choice for kids but something about Halloween makes the questionable acceptable. I think dying it green also helps.

If you’re looking for a last-minute party dish or just a fun pre-trick or treat snack you can’t get much easier than this. All you need is tapioca pudding and food coloring.

I bought store brand pudding because it was on sale and my mom raised me right, but the Kozy Shack is pretty delicious too. It has a fairly yellow tiny and I decided to work with that and used neon food coloring to turn it a switched brew green.

Just for fun I played around with a few cups of pudding and tested out the neon blue, neon green, and neon purple. It’s really just personal preference but I will warn you that the blue is much more powerful and will dye your tongue blue.

Mu kids were big fans so maybe that’s a plus?

In the end, I went with mostly green (around 14 drops for the whole tub) and a single drop of blue to cut back on the orangy tone. Stir it up until it’s not streaky anymore and you’re pretty much good to go.

I had some silicone witch cauldrons that were perfect for some single-serve Halloween dessert action. If you are serving this up at a party it would look really cool in a larger cauldron, I’ve seen them at Michael’s in the holiday baking section in the past.

You can serve up your witchy pudding plain but since it’s Halloween there’s no better time for gratuitous candy! I found the witch finger lollipops at the dollar tree, the large candy eyes can be found at most craft stores, and the small candy eyes and the gummy worms were from the grocery store.

If you’re on the wild side, you can sprinkle the pudding with pop rocks just before serving. The pudding will set off the popping but it’s an interesting experience for sure!

Halloween on a budget? Check out these DIY Dollar Tree Halloween Decorations

We all know how crazy fall can be and honestly, you can make this entire Halloween dessert with stuff from the grocery store. Grab the pudding, food coloring, and some gummy worms and you’re good to go!

Sprinkle with pop rocks just before serving for an extra spooky popping effect!

Check out my Halloween Page for more ideas or start here: