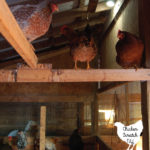 I went back and forth on writing this. You may not know this but there is a lot of controversy in chicken keeping, and I usually avoid starting fights. Obviously I decided to get involved so here is my opinion on lights in the chicken coop and a few reason why I will always use them.

Before we get into the real meat of the post I want to stress that I use light bulbs, not heat bulbs. I am adamantly against using heat for anything other than chicks in the house when I can keep an eye on things. Heat in the coop is bad, you don’t want the chickens accustomed to supplemental heat.

Worst case scenario, the bulb goes out and they all die because they didn’t get a chance to get acclimated to the cold. Also, it’s a waste of electricity because they don’t need it. It also helps to have winter hardy breed like my favorites Brahmas and Wyandottes.

Or fire. Yeah, that would be the wort  worst case scenario.

Back to the lights. The first reason is that I don’t believe it hurts them at all. The Chicken Chick has a great article on lighting where she covers this and really gets into the health effects of supplemental lighting.

I have used supplemental lighting as long as I have had chickens and I have 7 year old hens that are perfectly healthy and happy.

The blue-laced red wyandotte in the top picture is one of my original chickens! I’ve had her longer than I’ve had my house. She’s older than both of my children combined. 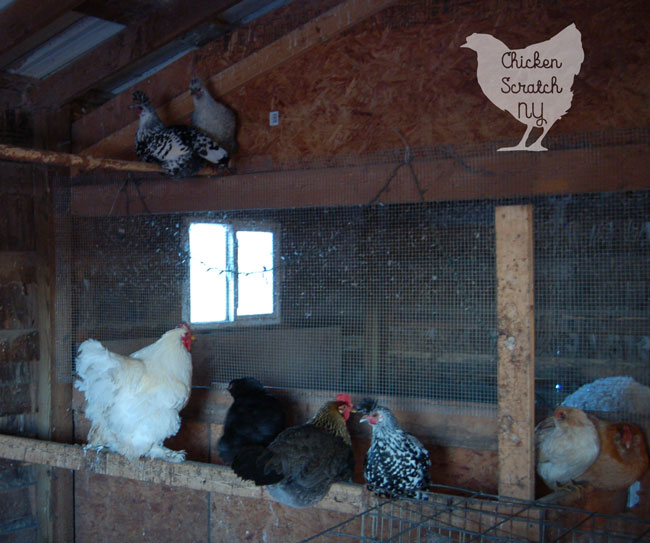 A lot of times I see people saying the chickens need a break and it’s meant to force them to lay all winter.

Well, I’ve got some news for you! You can’t  force a chicken to lay an egg. Anyone who has experience with chickens knows that. All the light in the world won’t make a chicken give up the goods.

Even with the lights on the timer I still don’t get half as many eggs as I do in the warmer months. The real reason I use supplemental lighting has nothing to do with eggs. The picture above shows the daylight brightness in the barn.

I live in central New York where we have winters. Lots of cold, snow and generally inhospitable conditions. My ‘coop’ is actually 1/3 of my barn sectioned off from the rest with plywood and hardware cloth.

There is a large 8 foot wide slider door, a regular door and three windows. Unfortunately that still doesn’t let that much light in. 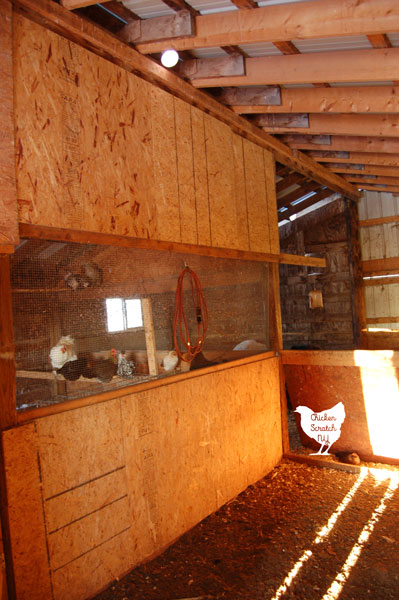 The picture above was taken around 5pm, the sun was setting and shining right in through the door. In the winter the days are short and the angle of the sun doesn’t let that much sun through the windows.

Even on a bright, sunny day with both doors open the barn is well lit for 6 hours at most. I don’t know about you but 18 hours of  darkness seems pretty miserable to me.

And those are the good days! I get at least one day a week where I don’t even open the front door because of blowing snow and wind. I open the big door on all but the worst days but with feet of snow in the field the chickens aren’t taking their feathered butts out anyway.

I do open the coop up everyday to give them free range of the barn, I have 28 chickens, 10 geese and 2 ducks at the moment sharing the barn with two alpacas. Fred & George do enjoy the snow and spend lots of time playing snow fence. 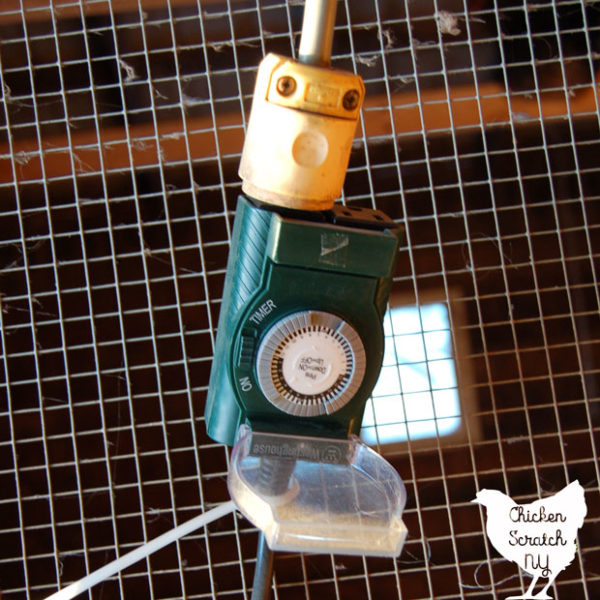 I have two light bulbs up at the very top of the barn and I run them on a timer. One light shines directly into the coop and the other shines into the open side of the barn.  The lights turn on at 6 am, off at 9 am back on at 5 pm and off at 8 pm.

I use a timer with a dial that I can set to always on if I need to; like yesterday when George was showing signs of a meningeal worm infection and the vet came out or when I found a possum in the coop at had to chase it out with a broom.

I will say that the way I run the lights isn’t the best possible practice. You should turn the lights on very early to get the recommended 15 hours of light then let the birds fall asleep when the sun goes down.

However I don’t get home until after 5 most days and I think it causes more issues turning the lights on in a dark barn than letting them go to roost and fall asleep with a light on. My chickens are usually all up and away by the time I get to the barn at night.

I use a Stanley timer that I picked up at Christmas when the old one died. This one has a plastic cover protecting the dial which comes in handy. My old timer didn’t have that and sometimes the dial would get bumped opening up the coop and the lights would get all crazy.

If you find yourself looking for lights DO NOT use Teflon coated shatter-resistant  bulbs. They give off fumes that can kill your chickens, especially in a small space. Murray McMurray will break that down for you.

What do you think? Do you use lights in the chicken coop during the winter months?

We have the solar light with Timer which is less than 45USD/set. It could keep more than 6hours with more 70Lm.

okay, so I took my light out about 2 weeks ago, would it be detrimental to put it back in? and set the timer to turn on at 5:00am and off at 9:00am, then on at 5pm and off at 9pm?...or should I just leave it out to avoid stress to them? I'm new to this chicken stuff and have succumbed to a lot of peer pressure to take the light out....help! hahah

I'm not sure where you are or how much daylight you're getting right now. If you already took it out I'd leave it out for the season and not worry about it.

Chicken keeping is an oddly controversial hobby, everyone has an opinion on everything! Chickens aren't very delicate, or at least I don't let mine be ;-)

Do you use a light in the spring and summer months as well? or just the winter/fall

I keep it out there all the time, you never know when you'll need to see something (like a possum...) at midnight. I usually turn off the timer in the beginning of May :-)

I do use lights, especially in the fall/winter. We have an automatic door that opens at dawn and closes at dusk. When the light starts to fade, especially in the fall, they seem to want to squeeze that last bit of "scratch" time out of the day and some will get locked out. With the lights on inside of the coop (I have a 15 foot set of LED rope lights strung down the middle of my coop) it encourages them to go in. We recently switched the door to a timer - SOOO much better! Especially when a thunderstorm rolls up and it gets dark enough for the light sensor to close the door in the middle of the day!! So we will see this year what this fall brings but I will probably still use light. Mine enjoy the last few minutes in the coop with the lights on to scratch around on the floor or grab a snack from the feeder before settling in for the night.