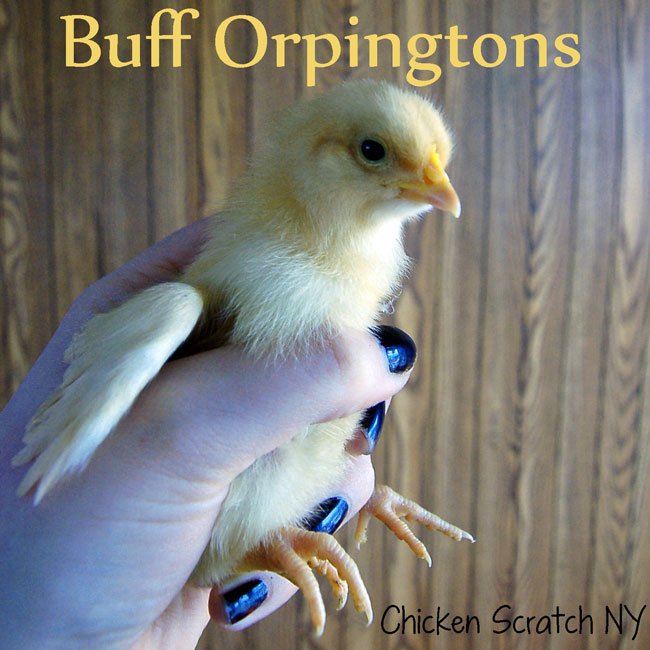 A trip to Tractor Supply to price check for our big spring project. We’re raising 50 meat birds this year and plan on building 2 cattle panel chicken tractors to raise the birds in the orchard. They will hopefully hold meaties in the spring and fall and be used as breeding pens in the summer so we can hatch out our own light brahmas, red laced blue wyandottes and orpingtons without crossbreeding. They will also provide shelter for the muscovies when they do their thing and provide me with dozens and dozens of ducklings. The other benefit will be not mowing the orchard nearly as often, the birds will keep the grass down, eat bugs and fertilize the soil.

After that super-long explanation… We were in TSC to check out the prices on cattle panels (~$22 by the way) and it happens to be chick days. I was with my husband and I swear! I was NOT going to come home with any little peepers. We’re ordering the meaties from a local feed store ($1.90 each and no shipping!) and I had planned on ordering some more RLB wyandottes and adding two breeds the Buff Orpingtons and some Cukoo Marans to our farm. 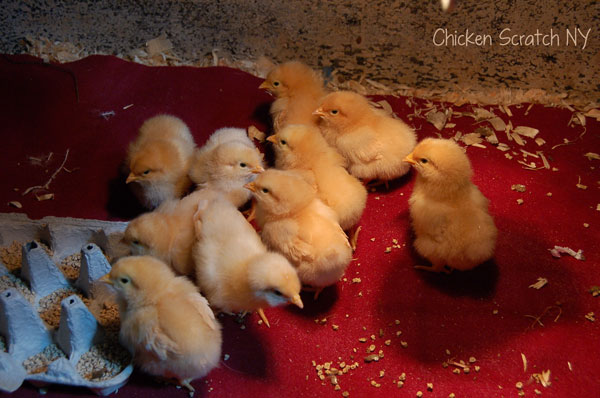 They had all the chicks out so we stopped to look, I was surprised because usually they sell out really fast and by the time we get there all the tubs are empty. BUT the tubs were not empty. AND the chicks were all 75 cents off! Still, I was strong. I was going to walk away. But then my lovely husband opened his mouth “Didn’t you want some buff orpingtons?”  “Uh.. yeah?”

Now, I love my husband but on most days he’s lucky if he can tell a brahma from a silkie. TODAY he decided to learn his chicken breeds? I gave in (there was much arm twisting) and said we could get six. His counter offer was 12, I talked him down to 10. I’m really an innocent bystander, the voice of reason in a chicken procurement scheme.

Luckily we had the tub set up from the duck-in-the-shower incident so it didn’t take much to get ready for them. One had a pasty butt and I had to clean her up but the other 9 had no problems and went right in the tub. 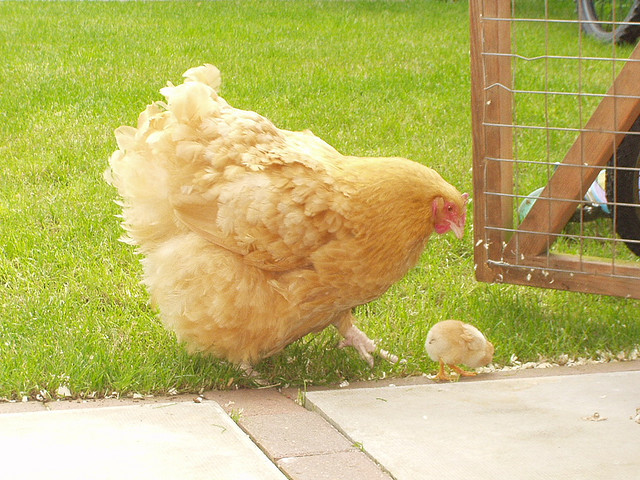 Buff Orpingtons are described by the American Standard of Perfection as a “general purpose fowl for heavy meat production and for eggs” with white skin and brown eggs. Roosters weigh in around 10 lbs and hens around 8. Expected egg production is 200-280 eggs per year. The feathers are a golden buff color. They are have fluffy butts (a must for all my chickens) and no feathers on their feet. As much as I love my brahmas feathered feet are a nightmare in a muddy spring barnyard. They are listed as a recovering heritage breed by the American Livestock Breeds Conservatory.

If you’re looking for some orpies (I just made that up) and can’t find them locally I recommend ordering from Cackle Hatchery. That’s were we bought our original turkeys and we had great service and healthy birds.
Follow my blog with Bloglovin

I just discovered your blog. I just wanted to let you know, that you are going to absolutely LOVE your Buff Orpingtons! They are by far the friendliest, sweetest and most lovable of all chicken breeds. They are like the "Golden Retriever" of the chicken world. They love kids and adore being handled often (especially if you handle them a lot as baby chicks). And yes, they have the most beautiful fuzzy butts!!! Come visit my blog. I keep a small flock of Buff Orps, and you can see them there. Have a blessed day!!

I have had birds from Cackle and they were all healthy, too. Our original flock had buff orps (a fine rooster) and hens, and was a great flock.

I love chicken math and how it works. I was in cal ranch just the other day, no intention of adding new birds....I have 6 silky and 6 BR's chicks all ready. But some how these 3 little EE's jumped in my car! I I love BO's enjoy ;)

I was always pretty good at math is school but I fail miserably at chicken math everytime! Luckily we've got enough room that 10 (or 20) more birds won't cause any problems. I didn't buy any new birds last year (had 6 random crossbreeds hatchout though!) so I figure I'm due for a few new layers. Silkie chicks are adorable, so tiny!