I’ve got most of my energy back so when my long weekend lined up with my husbands weekend off (he’s a nurse) I headed out to the barn and garden to get some long neglected work done without having to constantly rescue a two year old from the scary alpaca (shes never in danger, Fred likes to sniff her and she’s big enough to be really scary). I was out in the garden ripping out the dead and frozen asparagus stalks when I spotted something a little unusual. There was a bird nest tucked into the over grown and tangled foliage. 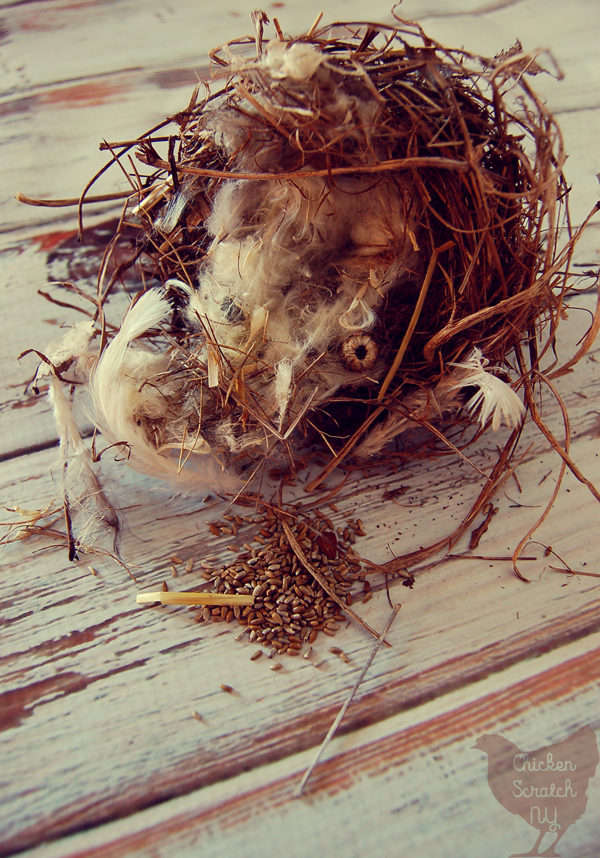 As much as I love asparagus I always err on the side of not harvesting enough in order to keep the plants going strong. This year the Martha Washington asparagus was about 6.5 ft tall and flopping into the raspberries by the end of summer. It’s situated in a corner of the garden pretty much on it’s own, the asparagus is in a big L-shaped bed about 6 feet from the fence with kiwi vines one side of the fence and raspberries growing along the other fence line. The kiwi are pretty but useless at this point and aside from a late fall pruning and a month of occasional berry picking the raspberries are mostly left to their own devices. Apparently a couple little birds decided that this quiet garden corner would be a nice spot to raise a family.

At first glace the nest looked like it was full of white feathers but once I brought it inside I noticed it was really a few feathers (most likely from a chicken or duck) and a lot of thistle silk, it was also full of seeds. That was the best clue to who had built the little nest. After a bit of googling I found that goldfinches nest late in the year compared to other birds, they wait for thistles and milkweed to go to seed. The silk from the thistles is used to line the nests and the seeds themselves feed the parents and babies. Goldfinches are some of the strictest vegetarians in the bird world, the only eat insects accidentally. By mid-June the asparagus would have been almost full sized and largely ignored, creating the perfect habitat for this little bird nest.

I found a #birdsnest when I was cleaning out the #asparagusbed today, after the spring #harvest it’s a pretty quiet corner of the #garden and apparently a nice place to raise a family

In college I was fascinated by systems ecology where you look at an entire ecosystem holistically. When you stop to think about this random little birds nest built in an overgrown asparagus patch a few light bulbs start to go off. The fact that my husband and I are lazy landscapers has clearly paid off for this bird family. I even have a 12*12 patch of milkweed that I protect religiously from my husbands lawn mowing adventures. Every year I let at least 5 thistles go to seed. I KNOW, you never let them go to seed. But we have 5 acres and use less than half of it. And I like watching the goldfinches flit from thistle to thistle. And I hate filling bird feeders, that’s a talk I save for the winter when ever possible (I do put up a humming bird feeder but that might get the ax when I get around to planting bee balm everywhere). As long as they aren’t in my veggie beds I’m ok with weeds. We have a healthy population of honeybees even though they seem to be on the decline everywhere. Most of out unused acreage is covered with ironweed, the purple flowers are covered in bees from mid summer until frost.

I also let the Queen Ann’s Lace grow almost where ever it comes up for the Black Swallowtail caterpillars. Come fall we have plenty of goldenrod and wild asters. Unsightly mud puddles are perfect spots for butterflies to snag some water and minerals. I guess the moral of this story is that you don’t really have to create habitats for wild life, just leave what’s there alone. Some of the weeds are prettier than anything I grow in my flower beds and (for the most part) they are there because they should be. Don’t see the stand of milkweed growing in the damp spot as an eyesore. Instead see it as a habitat, if you’re interested in seeing what else uses milkweed check out this site. You might be surprised to see how many different species rely on it.

How do you feel about weeds? Do you rip them out or let them grow?